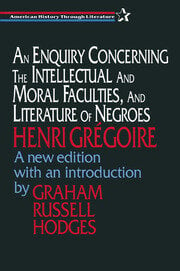 Amongst other things, this book is a devastating critique of Thomas Jefferson's Notes on the State of Virginia, in which he mused about black inferiority. Its publication in 1810, after Jefferson's opposition to its appearance, was a major event for African Americans.

Since Alexis de Tocqueville first made the linkage in his writings on America, a healthy democracy has been associated with the flourishing of civil society, as measured by popular participation in voluntary and civic activities and the vitality of organizations that mediate between the individual and the state. This volume takes a fresh look at this classic theme in the context of post-communist Eastern Europe, the West European welfare states and the United States, asking: what patterns of participation characterize the new democracies of Eastern Europe?; what levels of civic activism are characteristic of contemporary Western democracies?; what factors account for differences among countries and changing patterns over time?; and what do findings suggest about the prospects for democracy in the 21st century?