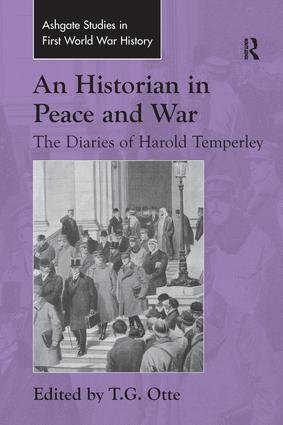 An Historian in Peace and War

The First World War and subsequent peace settlement shaped the course of the twentieth century, and the profound significance of these events were not lost on Harold Temperley, whose diaries are presented here. An established scholar, and later one of Britain’s foremost modern and diplomatic historians, Temperley enlisted in the army at the outbreak of the war in August 1914. Invalided home from the Dardanelles campaign in 1915, he spent the remainder of the war and its aftermath as a general staff officer in military intelligence. Here he played a significant role in preparing British strategy for the eventual peace conference and in finalising several post-war boundaries in Eastern Europe. Later, in the 1920s and 1930s, Temperley was to co-edit the British diplomatic documents on the origins of the war; and the vicissitudes of modern Great Power politics were to be his principal preoccupation. Beginning in June 1916, the diary presents a more or less daily record of Temperley’s activities and observations throughout the war and subsequent peace negotiations. As a professional historian he appreciated the significance of eyewitness accounts, and if Temperley was not at the very heart of Allied decision-making during those years, he certainly had a ringside seat. Trained to observe accurately, he recorded the concerns and confusions of wartime, conscious always of the historical significance of what he observed. As a result there are few sources that match Temperley’s diary, which presents a fascinating and unique perspective upon the politics and diplomacy of the First World War and its aftermath.

’The volume is a welcome addition to Ashgate’s Studies in First World War History series and the publishers, along with the editor, deserve praise for producing this substantial collection from the diaries, with such careful attention to detail. As well as a 35-page introductory essay, there are detailed biographical entries on characters mentioned in the text…a work that will serve to illuminate Britain’s planning for peace after the ’war to end all wars’. The diaries will be consulted with profit by those historians interested in British decision-making during the First World War and Paris Peace Conference, especially with regard to East-Central Europe.’ Hague Journal of Diplomacy

Contents: Preface; Introduction: an historian in peace and war; The diaries, 1916-1939; Index.

T.G. Otte, MA, PhD, is Professor of Diplomatic History at the University of East Anglia. He specializes in diplomatic history and the history of warfare. He is the author or editor of 15 books. Among his latest publications are The Foreign Office Mind: The Making of British Foreign Policy, 1865-1914 (2011) and July 1914: Europe’s Descent into World War (2014).