An Introduction to Gauge Theories 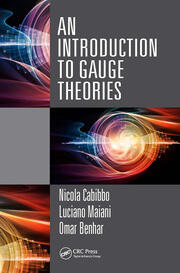 An Introduction to Gauge Theories

Written by world-leading experts in particle physics, this new book from Luciano Maiani and Omar Benhar, with contributions from the late Nicola Cabibbo, is based on Feynman’s path integrals. Key elements of gauge theories are described—Feynman diagrams, gauge-fixing, Faddeev-Popov ghosts—as well as renormalization in Quantum Electrodynamics. Quarks and QCD interactions are introduced. Renormalization group and high momentum behaviour of the coupling constants is discussed in QED and QCD, with asymptotic freedom derived at one-loop. These concepts are related to the Higgs boson and models of grand unification.

"… an excellent introduction to the quantum theory of gauge fields and their applications to particle physics. … It will be an excellent book for the serious student and a good reference for the professional practitioner. Let me add that, scattered through the pages, we can find occasional traces of Nicola Cabibbo's style."
—John Iliopoulos, CNRS-Ecole Normale Supérieure

"  … The volume ends with an illuminating description of the expectation generated by the recent discovery of the Higgs boson, combined with the lack of evidence for super-symmetric particles in the mass range 0.6-1 TeV."
—Arturo Menchaca-Rocha, FinstP, Professor of Physics, Mexico’s National Autonomous University, Former President of the Mexican Academy of Sciences, Presidential Advisor

"…The reader is masterfully guided through the subtleties of the quantum field theory and elementary particle physics from simple examples in Quantum Mechanics to salient details of modern theory."
—Mikhail Voloshin, Professor of Physics, University of Minnesota

Nicola Cabibbo (1935-2010) was professor of Theoretical Physics and Elementary Particle Phyiscs at the Rome Universities La Sapienza and Tor Vergata, and held research and teaching positions in prestigious institutions such as Harvard University, the Institute for Advanced Studies, Princeton, CERN, Geneva, University of California at Berkeley and Universite Paris VI. In 1962, Cabibbo discovered the phenomenon of quark mixing, described by a new natural constant, the Cabibbo angle, measured with great accuracy in semileptonic weak decays of hadrons. According to a recent analysis, Cabibbo's paper on quark mixing was the most influential article published in the journals of the American Physical Society during 1893-2003. In the 1980s, Cabibbo provided important momentum to the applications of numerical techniques to theoretical physics, notably the gauge theories of strong interactions, promoting and leading the development of the family of APE (Array Processor Experiment) supercomputers. He served as a member of a number of learned societies: Accademia Nazionale dei Lincei and Accademia delle Scienze di Torino, in Italy, National Academy of Science and American Association for Art and Sciences, in the USA, and Accademia Pontificia delle Scienze, which he chaired from 1993. An internationally reputed science manager, Cabibbo was President of Istituto Nazionale di Fisica Nucleare (INFN) and of Ente Nazionale per le Nuove Tecnologie per Energia e Ambiente (ENEA). He was the recipient of the J.J. Sakurai Prize (APS), the Medaglia Matteucci (Accademia Nazionale dei XL), the Dirac Medal, (ICTP Trieste), and the Benjamin Franklin Medal.

Luciano Maiani is emeritus professor of theoretical physics at the University of Rome, "La Sapienza", and author of more than two hundred scientic publications on the theoretical physics of elementary particles. Together with S. Glashow and J. Iliopoulos, Maiani made the prediction of a new family of particles, those with "charm", which form an essential part of the unifed theory of the weak and electromagnetic forces. He has been president of the Italian Institute for Nuclear Physics (INFN), director-general of CERN in Geneva and president of the Italian National Council for Research (CNR). Has promoted the development of the Virgo Observatory for gravitational wave detection, the neutrino beam from CERN to Gran Sasso and at CERN has directed the crucial phases of the construction of the Large Hadron Collider (LHC). He has taught and worked in numerous foreign institutes. He was head of the theoretical physics department at the University of Rome, "La Sapienza", from 1976 to 1984 and held the chair of theoretical physics from 1984 to 2011. He is a member of the Italian Lincean Academy and a fellow of the American Physical Society. For his scientific work, he has been awarded the J. J. Sakurai Prize, the Enrico Fermi Prize, the Dirac Medal, the High Energy and Particle Physics Prize of EPS and the Bruno Pontecorvo Prize.

Omar Benhar is an INFN research director and teaches gauge theories at the University of Rome, "La Sapienza". He has worked extensively in the United States as a visiting professor, at the University of Illinois and Old Dominion University, and was an associate scientist at the Thomas Jeerson National Accelerator Facility. Since 2013, he has served as an adjunct professor at the Centre for Neutrino Physics of Virginia Polytechnic Institute and State University. He is the author of more than a hundred scientific papers on the theory of many-particle systems, the structure of compact stars and electroweak interactions of nuclei.