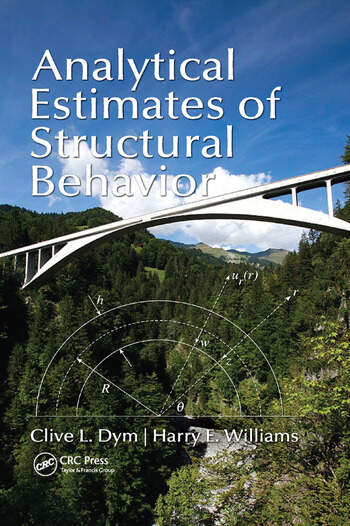 Explicitly reintroducing the idea of modeling to the analysis of structures, Analytical Estimates of Structural Behavior presents an integrated approach to modeling and estimating the behavior of structures. With the increasing reliance on computer-based approaches in structural analysis, it is becoming even more important for structural engineers to recognize that they are dealing with models of structures, not with the actual structures. As tempting as it is to run innumerable simulations, closed-form estimates can be effectively used to guide and check numerical results, and to confirm physical insights and intuitions.

This book encourages readers to think about structures and their models in a way that is rooted in classic elementary elasticity—depending less on advanced mathematical techniques and more on the dimensions and magnitudes of the underlying physics. The authors stretch the mold, emphasizing and more explicitly describing the modeling process. The focus is on learning which calculations to perform and how to validate and interpret the results—skills that will be increasingly useful for professional engineers.

Clive L. Dym is Fletcher Jones Professor of Engineering Design and director of the Center for Design Education at Harvey Mudd College. After receiving his PhD from Stanford University, Dr. Dym held appointments at the University of Buffalo; the Institute for Defense Analyses; Carnegie Mellon University; Bolt, Beranek and Newman; and the University of Massachusetts at Amherst. He has held visiting appointments at the TECHNION-Israel Institute of Technology, the Institute for Sound and Vibration Research at Southampton, Stanford, Xerox PARC, Carnegie Mellon, Northwestern, USC, and the Singapore University of Technology and Design. Dr. Dym has authored or coauthored more than a dozen books and 90 refereed journal articles, was founding editor of the journal Artificial Intelligence for Engineering Design, Analysis, and Manufacturing, and has served on the editorial boards of several other journals, including the ASME’s Journal of Mechanical Design. Dr. Dym is also a co-winner of the NAE’s 2012 Bernard M. Gordon Prize "for creating and disseminating innovations in undergraduate engineering design education to develop engineering leaders" (NAE).

Harry E. Williams is Professor Emeritus of Engineering at Harvey Mudd College. After receiving his PhD from the California Institute of Technology, Dr. Williams joined the research staff of the Jet Propulsion Laboratory and then joined Harvey Mudd College as one of the founding faculty of its engineering program, serving there for 40 years. He has also been a Fulbright fellow at the University of Manchester, a liaison scientist for the Office of Naval Research, and a consultant to General Dynamics, Teledyne Microelectronics, the Naval Weapons Center, Aerojet-General, and the Boeing Company. He has published widely over the years, reflecting his interests in fluid mechanics, therm