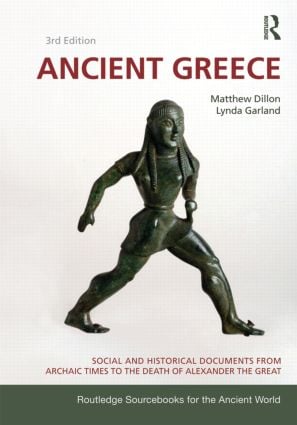 Social and Historical Documents from Archaic Times to the Death of Alexander the Great, 3rd Edition

In this revised edition, Matthew Dillon and Lynda Garland have expanded the chronological range of Ancient Greece to include the Greek world of the fourth century. The sourcebook now ranges from the first lines of Greek literature to the death of Alexander the Great, covering all of the main historical periods and social phenomena of ancient Greece. The material is taken from a variety of sources: historians, inscriptions, graffiti, law codes, epitaphs, decrees, drama and poetry. It includes the major literary authors, but also covers a wide selection of writers, including many non-Athenian authors. Whilst focusing on the main cities of ancient Greece - Athens and Sparta- the sourcebook also draws on a wide range of material concerning the Greeks in Egypt, Italy, Sicily, Asia Minor and the Black Sea.

Ancient Greece covers not only the chronological, political history of ancient Greece, but also explores the full spectrum of Greek life through topics such as gender, social class, race and labour. This revised edition includes:

It is structured so that:

Ancient Greece: Social and Historical Documents from Archaic Times to the Death of Alexander the Great. Third Edition, will continue to be a definitive collection of source material on the society and culture of the Greeks.

'The ideal companion to a political or cultural history of ancient Greece…the anthology is unrivalled…Very useful!' - International Review of Biblical Studies, Germany

'In this enlarged edition the editors have expanded the coverage to include the fourth century to give readers an even broader and better means to understand the development of Greek life.' – Contemporary Review

1. The Polis: The Greek City-State 2. Colonization 3. Religion in the Greek World 4. Women, Sexuality, and the Family 5. Labour: Slaves, Serfs and Citizens 6. Sparta 7. Tyrants and Tyranny 8. The Law-givers: Drakon and Solon 9. Peisistratos and his Sons 10. Kleisthenes the Reformer 11. The Persian Wars 12. The Delian League and the Pentekontaetia 13. The Peloponnesian War and its Aftermath 14. The Rise of Macedon 15. Alexander "the Great", 336-323 BC 16. The Ancient Sources

Routledge Sourcebooks for the Ancient World

Why not download our Routledge FreeBook Identity in the Classical World? In addition to excerpts from other Routledge titles addressing the concept of identity in antiquity, this resource contains a chapter from Ancient Greece, 3rd Edition.