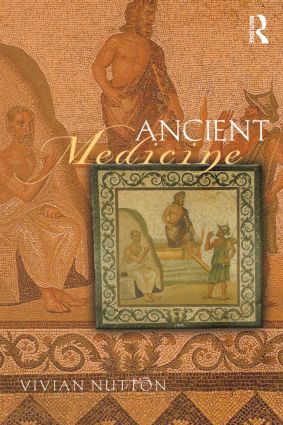 The first edition of Ancient Medicine was the most complete examination of the medicine of the ancient world for a hundred years. The new edition includes the key discoveries made since the first edition, especially from important texts discovered in recent finds of papyri and manuscripts, making it the most comprehensive and up-to-date survey available.

Vivian Nutton pays particular attention to the life and work of doctors in communities, links between medicine and magic, and examines the different approaches to medicine across the ancient world. The new edition includes more on Rufus and Galen as well as augmented information on Babylonia, Hellenistic medicine and Late Antiquity.

With recently discovered texts made accessible for the first time, and providing new evidence, this broad exploration challenges currently held perspectives, and proves an invaluable resource for students of both classics and the history of medicine.

"It is difficult to find a scholar with more expertise in Greco-Roman medical texts than Nutton, or as much historical breadth and range. Indeed, this is the only book available in English that offers a comprehensive survey of the long and complex tradition of Greek medicine from its earliest periods to the end of the Roman empire… Nutton masterfully guides the reader through the massive amount of literary, scientific, philosophical and material evidence, constructing a coherent and compelling narrative of the often heroic attempts of ancient doctors to understand and treat disease. The new edition will be essential as a starting point for all serious students of Greek and Roman medicine." – Ralph M. Rosen, University of Pennsylvania, USA.

"The first edition of Vivian Nutton’s Ancient Medicine (2004) is already established as the most authoritative, and expansive, synthetic treatment of the subject available… This new edition is motivated by the recent discovery, and/or publication, of new evidence to add to this rich picture, as well as the continued development of the scholarly field more broadly. All of this is encompassed in Nutton’s new edition, from the items that have made a big splash, to those that have more stealthily crept up on us… None of this changes the basic pattern which Nutton outlines, all can be incorporated into his basic narrative, but this is still an even richer, and more complex, version of that story: the new edition is even more authoritative as a result." - Rebecca Flemming, University of Cambridge, UK.

'A worthy enterprise … The result is a masterful evaluation of health and disease … Galen would have been pleased.' – W.F Bynum, The Times Higher Education Supplement

'[A] near-masterpiece, Ancient Medicine is a huge quarry, fit for mining and exploitation by those who have the proper equipment.' – BMCR

'This is an impressive piece of research. It will . . . serve both as introduction and as comprehensive guide for generations of scholars interested in the development of medical ideas from early Greece to late antiquity . . . This book is an essential tool for anyone interested in the history of Western medicine.' - Biblical Theology Bulletin

Sources and Scope. Patterns of Disease. Before Hippocrates. Hippocrates, the Hippocratic Corpus and the Defining of Medicine. Hippocratic Theories. Hippocratic Practices. Religion and Medicine in Fifth- and Fourth-Century Greece. From Plato to Praxagoras. Alexandria, Anatomy and Experimentation. Hellenistic Medicine. Rome and the Transplantation of Greek Medicine. The Consequences of Empire: Pharmacology, Surgery and the Roman Army. The Rise of Methodism Humoral Alternatives. The Life and Career of Galen. Galenic Medicine. All Sorts and Conditions of (Mainly) Men. Medicine and the Religions of the Later Roman Empire. Medicine in the Later Roman Empire

Vivian Nutton, FBA, is Professor emeritus of the History of Medicine at University College London, and an honorary Professor in both Classics and History at the university of Warwick. He has published extensively on all aspects on medicine before the seventeenth century, and in particular on Galen and the Renaissance.

The volumes in Sciences of Antiquity explore how the ancients saw, interpreted and handled the natural world, from the elements to the most complex of living things. Their discussions on these matters formed a resource for those who later worked on the same topics, including scientists. A consequent purpose is to provide historians with an understanding of the materials with which later writers, rather than passively receiving and transmitting ancient ideas, constructed their own world view.