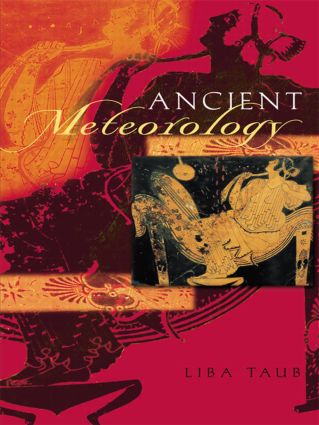 The first book of its kind in English, Ancient Meteorology discusses Greek and Roman approaches and attitudes to this broad discipline, which in classical antiquity included not only 'weather', but occurrences such as earthquakes and comets that today would be regarded as geological, astronomical or seismological.

The range and diversity of this literature highlights the question of scholarly authority in antiquity and illustrates how writers responded to the meteorological information presented by their literary predecessors.

Ancient Meteorology will be a valuable reference tool for classicists and those with an interest in the history of science.

'Offers distinct and major advantages … insightful … Taub's book capably and effectively closes a gap in the literature of the history and ancient science … It is a book that both specialists and beginners will need to use when approaching the subject.' - RHIZAI

'Reports clearly, succinctly, and with convincing control and expertise … I warmly recommend her book.' - Classical World

The volumes in Sciences of Antiquity explore how the ancients saw, interpreted and handled the natural world, from the elements to the most complex of living things. Their discussions on these matters formed a resource for those who later worked on the same topics, including scientists. A consequent purpose is to provide historians with an understanding of the materials with which later writers, rather than passively receiving and transmitting ancient ideas, constructed their own world view.