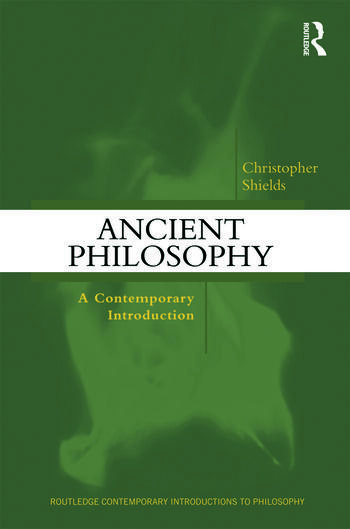 In this re-titled and substantially revised update of his Classical Philosophy (2003), Christopher Shields expands his coverage to include the Hellenistic era, and now offers an introduction to more than 1,000 years of ancient philosophy.  From Thales and other Pre-Socratics through Socrates, Plato, and Aristotle, and on to Epicureanism, Stoicism, and Scepticism, Ancient Philosophy traces the important connections between these periods and individuals without losing sight of the novelties and dynamics unique to each.

The coverage of Plato and Aristotle also has been expanded.  It now includes, for example, updated coverage of Plato's allegories of the cave and the divided line and the metaphor of the sun as well as features of Plato's epistemology.  Shields also adds new discussion on Aristotle's theory of virtue and his approach to the Socratic problem of akrasia, or weakness of will.

In terms of its structure, Ancient Philosophy is presented so that each philosophical position receives: (1) a brief introduction, (2) a sympathetic review of its principal motivations and primary supporting arguments, and (3) a short assessment, inviting readers to evaluate its plausibility.  The result is a book that brings the ancient arguments to life, making the introduction truly contemporary.  It will serve as both a first stop and a well visited resource for any student of the subject.

Ancient Philosophy offers a vivid picture of the ideas that flourished at philosophy's long birth and considers their relevance, both to the historical development of the Western philosophical tradition, and to philosophy today.

@content:Introduction Acknowledgments Part One: Philosophy Before Socrates 1.1 Thales and the Earliest Natural Philosophers 1.2 Xenophanes 1.3 Heracleitus 1.4 Parmenides and Zeno 1.5 Democritus and Fifth-Century Atomism 1.6 Protagoras and the Sophistic Movement 1.7 Challenges from the Presocratics and Sophists Part Two: Socrates 2.1 The Socratic Elenchus 2.2 The Failures of Meno and Euthyphro 2.3 Socratic Ignorance and Socratic Irony 2.4 Socratic Conviction and the Socratic Paradoxes 2.5 Socrates on Trial and in Prison 2.6 Conclusions Part Three: Plato 3.1 From Socrates to Plato 3.2 Meno's Paradox of Inquiry; Plato's Response 3.3 Two Functions of Plato's Theory of Forms 3.4 Plato's Rejection of Relativism 3.5 Three Arguments for Forms 3.5.1 Aristotle's Introduction to Platonic Forms 3.5.2 Equality Itself: An Argument from the Phaedo 3.5.3 Knowledge and Belief: An Existence Argument from Republic V. 3.6 Plato's General Characterizations of Forms 3.7 Platonic Analysis: A Case Study 3.8 The Special Role of the Form of the Good: The Sun 3.9 Plato's Line and Cave 3.10 Problems about Forms 3.11 Conclusions Part Four: Aristotle 4.1 From Plato to Aristotle 4.2 Aristotle's Introduction to Category Theory 4.3 The Four Causes Introduced 4.4 The Four Causes Defended 4.4.1 Aristotle's Defence of Matter and Form 4.4.2 The Efficient Cause 4.4.3 The Final Cause 4.5 The Four Causes at Work I: Soul and Body 4.6 The Four Causes at Work II: Happiness and the Human Function 4.7 The Virtues of a Happy Person 4.8 Aristotle's Treatment of a Socratic Paradox: Akrasia 4.9 Aristotle on Philosophical Analysis 4.10 Conclusions Part Five: Hellenistic Philosophy 5.1 The Hellenistic Period 5.2 Epicureanism 5.2.1 The Sources and Core Doctrines of Epicureanism 5.2.2 Epicurean Hedonism 5.2.3 Fearing Death: For the Uninitiated 5.2.4 Fearing Death: For the Initiated 5.3 Stoicism 5.3.1 The Sources and Core Doctrines of Stoicism 5.3.2 Stoic Virtue: Oikeosis and Living in Accordance with Nature 5.3.3 Stoic Freedom 5.3.4 Value Monism: Stoic Emotions and Preferred Indifferents 5.4 Scepticism 5.4.1 Sources of Scepticism and Core Approaches 5.4.2 The Character of Pyrhhonism 5.4.3 Sceptical Tropes 5.4.4 Sceptical Challenges 5.5 Conclusions Suggestions for Further Reading