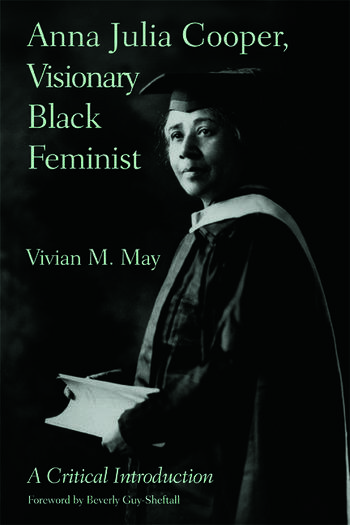 Vivian M. May explores the theoretical and political contributions of Anna Julia Cooper, a renowned Black feminist scholar, educator and activist whose ideas deserve far more attention than they have received. Drawing on Africana and feminist theory, May places Cooper's theorizing in its historical contexts and offers new ways to interpret the evolution of Cooper's visionary politics, subversive methodology, and defiant philosophical outlook. Rejecting notions that Cooper was an elitist duped by dominant ideologies, May contends that Cooper's ambiguity, code-switching, and irony should be understood as strategies of a radical methodology of dissent.

May shows how across six decades of work, Cooper traced history's silences and delineated the workings of power and inequality in an array of contexts, from science to literature, economics to popular culture, religion to the law, education to social work, and from the political to the personal. May emphasizes that Cooper eschewed all forms of mastery and called for critical consciousness and collective action on the part of marginalized people at home and abroad. She concludes that in using a border-crossing, intersectional approach, Cooper successfully argues for theorizing from experience, develops inclusive methods of liberation, and crafts a vision of a fundamentally egalitarian social imaginary.

Introduction: 'A Woman of Rare Courage and Conviction'  1. 'A Little More than Ordinary Interest in the Underprivileged': Cooper's Lifelong Commitment to Liberation  2. 'Life Must be Something more than Dilettante Speculation': Cooper's Multidimensional Praxis  3. 'If you Object to Imaginary Lines - Don't Draw them!': Cooper's Border-crossing Methods  4. 'Failing at the Most Essential Provision of the Revolutionary Ideal': Lessons from France and Haiti's Transatlantic Struggle over Abolition and Égalité  5. Mapping Sites of Power: Cooper's Redefinition of 'the Philosophic Mind'  6. Tracing Resistant Legacies, Rethinking Intellectual Genealogies: Reflections on Cooper's Black Feminist Theorizing

May has written the first book to really situate Cooper as a radical intellectual. She elucidates not only Cooper's brilliant critique of racism and sexism, but her cross-disciplinary analysis of literature, education, religion, law and American culture. Most importantly, May establishes Cooper’s philosophy of liberation—one that is global, historically grounded, passionate, and lived. From now on, anyone teaching 20th century intellectual history must come to terms with Anna Julia Cooper. —Robin D. G. Kelley, Columbia University, author of Freedom Dreams: The Black Radical Imagination

"May places Cooper in a rich political, philosophical and literary context in which her prescient work can at long last be fully appreciated. She enables readers to understand just how and why Cooper might have been misunderstood, and links such misunderstanding with some of the very political constraints under which Cooper labored. This promises to be the kind of book about which people will say, ‘Wow!  How can we have missed out on all this?’" —Elizabeth V. Spelman, Smith College, author of Fruits of Sorrow: Framing Our Attention to Suffering

"May has accomplished a major feat: she has given one of the greatest philosophical and political thinkers of the late nineteenth century and early twentieth century her intellectual due." -- African American Review