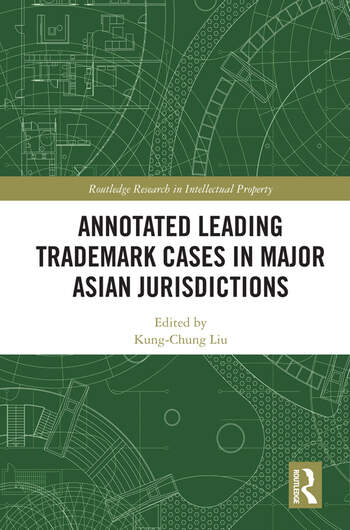 There has been little or no study on trademark laws in Asia on a cross-jurisdictional level. This book aims at filling the existing gap and provides a comprehensive overview of trademark laws of eight major Asian jurisdictions and their most-updated trademark case law. The book analyses six of the principal issues that best reflect Asian features in trademark law and trademark development.

The cases in the book are principally the most authoritative decisions, usually the first to deal with certain new emerging issues, or the first to apply particular statutory provisions in the respective jurisdiction. Also included are a small number of direction-changing, outlying or even controversial decisions. Each case report is divided into six sections: summary, legal context, facts, reasoning of the court, legal analysis, and commercial or industrial significance.

Readers will find this book useful in both its overview of the legal context and how those cases are to be interpreted legally and commercially.

1 Features of trademark laws and cases in major Asian jurisdictions

PART 2 Use of trademarks/likelihood of confusion on the Internet

Right-maintaining use and infringing use of trademark

Legal consequences of non-use in Indonesia

Google’s keyword advertisement in Taiwan: no use of trademark, but obviously unfair

Confusion and passing off

4 Similarity in appearance, concept or pronunciation alone does not automatically lead to similarity of marks in Japan

Market survey in Malaysia: an impracticable and undesirable way to adduce evidence in trademark lawsuit

Proving acquired distinctiveness through use by questionnaire

International exhaustion in Singapore: broad interpretation of "put on the market", yet offer for sale excluded

The exhaustion defence to trademark infringement and parallel importation in Malaysia

Against likelihood of dilution

Against registration of confusingly similar trademarks

Concurrent trademark infringement and unfair competition in the Philippines

Against abuse of registered trademarks

Exclusive licensee’s rights in Singapore: contractual and not proprietary against owners of marks

Defense against damages: no trademark use

Defense against damages: non-occurrence of damage

Damages for trade mark infringement in Singapore: getting what one deserves?

38 Remedying mischief in deciding jurisdiction favouring the plaintiff in India

Kung-Chung Liu is Lee Kong Chian Professor of Law (Practice), Director of the Applied Research Centre for Intellectual Assets and the Law in Asia (ARCIALA) at Singapore Management University and also Professor at Renmin University of China.

"This book provides rich insights on current trademark issues in major Asian jurisdictions, and covers the most vital and practical topics on trademark law. The authors are the leading scholars in Asia, offer engaging and thought-provoking analysis. With the book’s valuable comparative perspective, it is an excellent reference for practitioners and academics to understand the legislative trends and how different jurisdictions interpreted and applied the rules." — Gi-Kuen Jacob Li, Assistant Professor, Institute of Law for Science and Technology, National Tsing Hua University, Taiwan

"Given the rapid growth of the Asian market, protecting trademark rights in Asia has become more important than ever before. Against this backdrop, Annotated Leading Trademark Cases in Major Asian Jurisdictions presents a much-needed examination of Asian trademark law through in-depth analysis of landmark cases. Led by Professor Kung-Chung Liu, contributors to this volume explore theoretically significant and practically relevant issues concerning Asian trademark law. This volume is a major contribution to trademark scholarship."— Haochen Sun, Associate Professor of Law, The University of Hong Kong