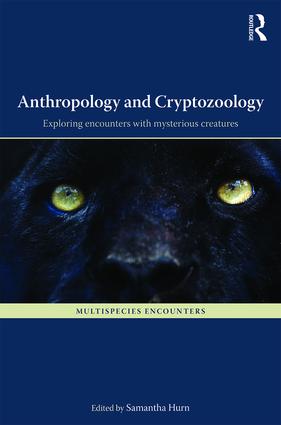 Cryptozoology is best understood as the study of animals which, in the eyes of Western science, are extinct, unclassified or unrecognised. In consequence, and in part because of its selective methods and lack of epistemological rigour, cryptozoology is often dismissed as a pseudo-science. However, there is a growing recognition that social science can benefit from engaging with it, for as as social scientists are very well aware, ’scientific’ categorisation and explanation represents just one of a myriad of systems used by humans to enable them to classify and make sense of the world around them. In many cultural contexts, myth, folk classification and lived experience challenge the ’truth’ expounded by scientists. With a reflexive, anthropological approach and drawing on rich empirical and ethnographic studies from around the world, this volume engages with the theoretical and methodological issues raised by reported sightings of unrecognised animals. Bringing into sharp focus the anthropological value and challenges for methodology posed by beliefs about unclassified creatures, Anthropology and Cryptozoology: Exploring encounters with mysterious creatures will be of interest to anthropologists, sociologists and geographers working in the fields of research methods, anthrozoology, mythology and folklore and human-animal interaction.

'I really, really enjoyed reading this book. It provides a fascinating anthropological perspective on cryptozoological and related claims. The diversity of unknown animal claims considered is far wider than that seen in typical cryptozoology texts. Thus we have discussion of werebeings, non-corporeal snakes and mermaids, as well as more conventional cryptozoological fare like mystery cats.' - Charles Paxton, University of St Andrews, U.K

'When anthropologists bring their ethnographic encounters into conversation with cryptozoology the result is wildly unsettling. How are unseen creatures known? Who decides what is real? Is knowledge always tentative and provisional? What multispecies ethics do cryptids call forth? Anthropology and Cryptozoology is a trip through beastly domains that challenge us to think widely, generously, indeed extravagantly.'- Deborah Bird Rose, University of New South Wales, Australia

'The scholars writing in Anthropology and Crytozoology treat the creatures of contemporary legend with a respect once reserved for ancient deities, by considering their ontological foundations and enthnozoological context. This gives new subtlety to the formerly marginal field of cryptozoology.' - Boria Sax, author of The Mythical Zoo and Imaginary Animals

1.The Place of Cryptids in Taxonomic Debates

2. Cryptids, Classification and Categories of Cats: an Ethnozoological Study of Unidentified Felids from Eastern Indonesia

3. Cryptids and Credulity: the Zanzibar Leopard and Other Imaginary Beings

4. ‘By dreaming I’ll go to the tiger-world’: the Naga tiger-man and the modern assemblage of a myth

5. Human Predation and Animal Sociality: The Transformational Agency of ‘Wolf People’ in Mongolia

6. Enigmatic Bush Dwarfs of West Africa: The Case of the Siyawesi of Northwestern Benin

7. Suspending disbelief and experiencing the extraordinary: how radical participation may facilitate an understanding of aquatic snake and fish-tailed beings in southern Africa

8. Mermaids in Brazil: The (ongoing) creolisation of the water goddesses Oxum and Iemanjá

9. Ganka: Trickster or Endangered Species? An anthropologist’s role in preventing the extinction of the New Jersey sea monster.

10. Far from the Madding Crowd: Big Cats on Dartmoor and in Dorset, UK

11. Land of Beasts and Dragons. Contemporary Myth-Making in Rural Wales.

12. Digesting ‘cryptid’ snakes: A phenomenological approach to the mythic and cosmoge-netic properties of serpent hallucinations

is Senior Lecturer in Anthropology and Director of the Exeter Anthrozoology and Symbiotic Ethics (EASE) working group, and the MA and Ph.D programmes in Anthrozoology at the University of Exeter, UK.

Multispecies Encounters provides an interdisciplinary forum for the discussion, development and dissemination of research focused on encounters between members of different species. Re-evaluating our human relationships with other-than-human beings through an interrogation of the ’myth of human exceptionalism’ which has structured (and limited) social thought for so long, the series presents work including multi-species ethnography, animal geographies and more-than-human approaches to research, in order not only better to understand the human condition, but also to situate us holistically, as human animals, within the global ecosystems we share with countless other living beings. As such, the series expresses a commitment to the importance of giving balanced consideration to the experiences of all social actors involved in any given social interaction, with work advancing our theoretical knowledge and understanding of multi-species encounters and, where possible, exploring analytical frameworks which include ways or kinds of ’being’ other than the human.