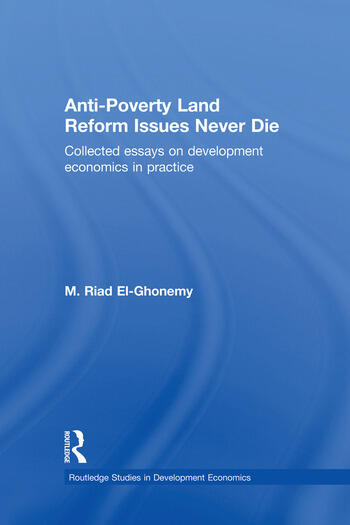 What can we do to unlock the unrealised potential of the hundreds of millions of rural poor and landless workers?

The ever-topical central theme in this collection of essays is the mixed role of government and the institutionally regulated market in tackling rural poverty and land distribution inequality. Drawing on over half a century of M. Riad El-Ghonemy’s academic and field experience in developing countries across Africa, Latin America, the Middle East and South East Asia, this is a comprehensive record of the late-twentieth century study of and struggle against rural inequality, seen through the eyes of one of its foremost observers.

Containing a balance of in-depth field studies and El-Ghonemy’s personal observations from 1952 onwards, this volume provides the basis for discussion and debate on a range of  developmental issues. Foremost among these is the appropriate approach both to explain the factors underlying developing countries' rural backwardness, and to enable them to achieve the Millennium Development Goal of halving the incidence of poverty and hunger by 2015. The compelling argument made here is that redistributive land reform, combined with non-farm intensive employment opportunities and investment in education within rural areas are necessary to tackle persistent poverty effectively.

1. What Does Participation of the Poor in Development Mean?

2. Are the Neglect of Agriculture and Land Concentration Responsible for Increasing Poverty and Slow economic Growth in Developing Countries?

3. The Distortion of Rural Development Issues

4. The Economics of Agricultural Land Fragmentation

5. The Impact of Multinational Corporations on Land Tenure and Agricultural Labour in Developing Countries

6. The Peasants’ Command over their Food Needs and Labour Employment is a strong Justification for Redistributive Land Reform

7. The Rationale for Anti-Poverty Land Reform?

9. The Role of Land Tenure Institution in The Social Structure of Pre-Land Reform Egypt: a case study

10. The Labour and Capital Markets in the Mid-Twentieth Century Egyptian Agriculture

11. Land Property Rights and their Diverse Adjustments in Latin America during the 1950s

12. The Development of Tribal Agricultural Lands and Transformation of Nomadism to Settled Farming in Libya

13. The Contribution of Reforming the Land Tenure System to Food Security and Economic Development in the Middle East

14. Land Reform in Egypt and the Philippines: similarities, differences, and challenges

15. The Roles of the State and Market in Land Property Transfer: lessons from Egypt regarding the Soviet Union’s agrarian ‘Glasnost’

17. The Prospects for Rural Development in Africa