Anticipating The Wealth of Nations
The Selected Works of Anders Chydenius, 1729–1803 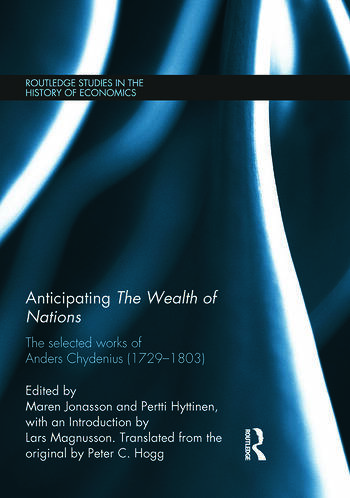 Anticipating The Wealth of Nations: The Selected Works of Anders Chydenius, 1729–1803

Maren Jonasson is Editor-in- Chief of the Collected Works of Anders Chydenius. She is currently employed by the University of Jyväskylä in Finland.

Pertti Hyttinen is Editor of the Collected Works of Anders Chydenius. He is currently employed by the University of Jyväskylä in Finland.

Lars Magnusson is full professor and chair in Economic History, Uppsala University, Sweden, member of the Royal Academy of Sciences and chairman of Swedish Collegium for Advanced Study (SCAS).

'Anders Chydenius (1729-1803) has sometimes been called "Scandinavia's Adam Smith" for his publications in the 1760s. Until now it has been impossible to non-Swedish readers to judge whether this is a reasonable epithet. This collection of Chydenius's writings provides the answer.' - Bo Sandelin, University of Gothenburg, Sweden