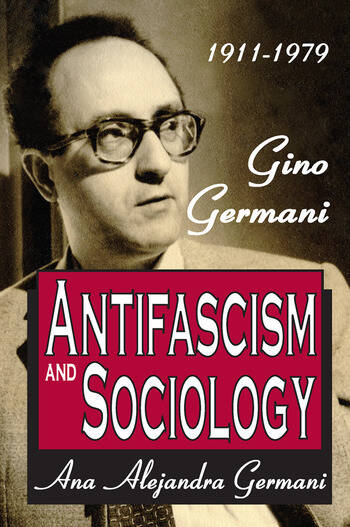 In this fascinating account of the master social scientist and policy innovator, Gino Germani, written by his daughter, the reader will find a rich social and intellectual history. Germani's life traversed Italy under Mussolini's fascism, Argentina under Peronism, and North America during the glorious days of the social sciences' postwar expansion. With high irony, the biography concludes with Germani's return to Naples, Italy, as what Ana Germani correctly calls "an outsider in the homeland." This is a volume that should be uniquely appealing to area specialists, social psychologists, and those concerned with the cross-currents of politics and society.

From his youth in Italy, which he left as a result of persecution by the Fascist authorities, through his long and distinguished career in international social science, and a career carved out in a series of exiles, Germani maintained a unity of purpose based on a liberal world outlook in political terms and a struggle against totalitarianism. Social science was the cement that bound Germani's affirmations of democracy and his opposition to dictatorship. In Argentina, Germani is recognized as the founder of modern scientific sociology. There as elsewhere, his work was grounded on the presumption that a biometric society was the ground on which all science develops.

Living and working during one of the most fertile periods in the development of social research in Argentina, Germani was the central protagonist of its most fertile period. Argentina served as a central focal point for discussion and debate on the practices of modern societies and the cultural forms. Whether in Italy, Argentina, or the United States, German's work took seriously the individual and transpersonal events that helped form social structures of modernization. The book is rich in details, providing a full bibliography of the works of Germani, his relationships with foundations, universities and personnel, and brief profiles of individuals who worked with and knew him.

Preface
Introduction: Sociologist from the Other America
1. Fascism and Exile
2. Defining an Intellectual Perspective:
University Studies and First Research Projects
3. The Peronist Years: Exile within Exile
4. Building a Tradition in Social Sciences
between Military Coups: 1955-1966
5. The Collapse of a Scientific Paradigm
6. Harvard University
7. A Partial Return:
The Intellectual Contribution of an Antifascist
to International Social Sciences
Appendix
General Bibliography
Index