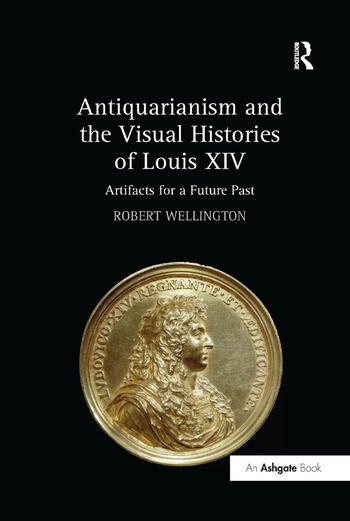 Antiquarianism and the Visual Histories of Louis XIV: Artifacts for a Future Past

Antiquarianism and the Visual Histories of Louis XIV: Artifacts for a Future Past provides a new interpretation of objects and images commissioned by Louis XIV (1638-1715) to document his reign for posterity. The Sun King's image-makers based their prediction of how future historians would interpret the material remains of their culture on contemporary antiquarian methods, creating new works of art as artifacts for a future time. The need for such items to function as historical evidence led to many pictorial developments, and medals played a central role in this. Coin-like in form but not currency, the medal was the consummate antiquarian object, made in imitation of ancient coins used to study the past. Yet medals are often elided from the narrative of the arts of ancient règime France, their neglect wholly disproportionate to the cultural status that they once held. This revisionary study uncovers a numismatic sensibility throughout the iconography of Louis XIV, and in the defining monuments of his age. It looks beyond the standard political reading of the works of art made to document Louis XIV's history, to argue that they are the results of a creative process wedded to antiquarianism, an intellectual culture that provided a model for the production of history in the grand siècle.

Contents: Introduction: medals and the material turn in the king’s history; Antiquarianism at court; The Petite Académie and the histoire métallique of Louis XIV; The Cabinet des Médailles at Versailles; Images inscribed and described by the Petite Académie; The antiquarian origins of Louis XIV’s medals books; Portraiture, physiognomy, and the numismatic sensibility; Numismatic resonances: Le Brun’s cycle for the Hall of Mirrors at Versailles; Epilogue; Bibliography; Index.

Robert Wellington is a lecturer at the Centre for Art History and Art Theory, Australian National University.

'Antiquarianism and the Visual Histories of Louis XIV is carefully researched and well-written. Wellington's thorough examination of the elite practice and practitioners of antiquarianism, the institutional body of the Petite Académie that was responsible for the design and inscriptions of medals, the collecting and display of the medals in the Cabinet des Médailles at Versailles, and the various engraved reproductions of numismatic collections, makes this study an important contribution to the scholarship of the artistic, cultural, institutional and intellectual history of the France of Louis XIV.' --Julie Anne Plax, University of Arizona, USA

'Placing medals, antiquaries and posterity at the centre of his story, Robert Wellington approaches the public image of Louis XIV from a new angle.' --Peter Burke, Emmanuel College Cambridge

'Robert Wellington's fascinating and comprehensive account of the great programme of visual commemoration undertaken by Louis XIV and his government throws new light on this complex and revealing portrait of an extraordinary reign.' --Mark Jones, Master of St Cross College, Oxford, UK

'Archival sources and rare publications from the time are mined in this important scholarly account, which mounts a strong argument for the cultural importance of the medals and the centrality of a 'numismatic sensibility' throughout Louis' iconography.' --The Medal

"What is particularly significant in [this book] is that the majority of the book is about numismatics as science and source, little addressed by recent historians other than as an annex or an occasional illustration of this or that work. Thus, the fine work of Robert Wellington, richly illustrated with well-chosen photographs of ancient and modern coins and medals, does not just describe them but rather uses them beautifully to reflect on their achievements, their uses and their impacts." --Fabrice Charton, H-France

‘Perhaps the only criticism to be levelled against this engaging scholarly masterpiece might be a quibble with the title and the prominence of the term ‘antiquarianism’ for the simple if unfair reason it is bound to turn off some readers who would otherwise profit from a topic that bears upon all the visual arts, the institutions supporting them, and the history of collecting and display in early modern France.’ -- The Burlington Magazine

‘Robert Wellington shows in his work his perfect knowledge of the history and literature of the Grand Siècle. […] [This book is] a new milestone in the comprehension of the Republic of Letters, the history of the medal, and artistic politics of Louis XIV.’ --Ludovic Jouvet, Revue de l’Art

'The historiographic practices of King Louis XIV’s monarchical representation have often been examined from different perspectives and with different emphases of thematic and medial nature. Wellington’s book not only fits in with these studies, for which Louis Marin has certainly provided the most lasting and effective stimulus, but also gains new insights into the multimedia of antiquarian and historiographic practice.' --Albert Schirrmeister, Francia recensio