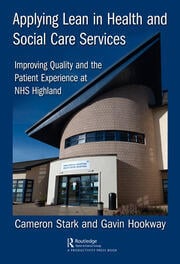 Organizations around the world are using Lean to redesign care and improve processes in a way that achieves and sustains meaningful results for patients, staff, physicians, and health systems. This book systematically describes how NHS Highland uses Lean principles and mindsets to improve safety, quality, access, and morale while reducing costs, and increasing capacity.

Existing books often describe the gains obtained by using Lean methods, but often do not describe the underlying concepts and methods in details. Other books describe continuous improvement work, or specific techniques such as daily management in detail. This book seeks to occupy a middle space by providing an overview of the range of Lean ideas applicable to healthcare with sufficient examples and cases studies from NHS Highland and partner organizations so readers can see them in use and practice.

A medical graduate of Glasgow University, Cameron has worked in medical and surgical posts, and trained in the West of Scotland in Psychiatry, and later also in Public Health. He has been an NHS Consultant since 1994. Cameron is the author or editor of five textbooks, and has published over 60 academic papers.

Gavin originally undertook an Electronic Engineering apprenticeship with Marconi Space and Defence Systems, which he completed in 1984. He worked as a Computer Aided Design (CAD) draughtsman on the design of printed circuit boards for multiple applications, before moving into the field of Production Engineering. Within this field, he worked for various companies who produced high end, innovative, commercial products.

In 1991, Gavin undertook a complete career change and embarked on Operating Department Practitioner training which he successfully completed in 1993. He became a Local Assessment Co-ordinator and Internal Verifier for ODP training within Portsmouth Hospitals Trust, gaining extensive experience and qualifications in teaching and training. Gavin has worked in Operating Theatres in the NHS, Independent and Private sectors, and held the role as National Head of Theatre Services for the BUPA Hospitals Group. His expertise in improving theatre utilisation has been recognised with a BUPA Group Annual Excellence Award (2007).