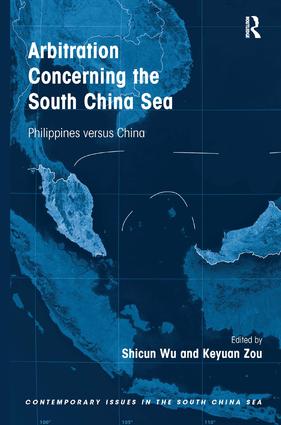 On 22 January 2013, the Republic of the Philippines instituted arbitral proceedings against the People’s Republic of China (PRC) under the United Nations Convention on the Law of the Sea (UNCLOS) with regard to disputes between the two countries in the South China Sea. The South China Sea Arbitration is a landmark case in international law because of the parties involved, the legal questions to be decided and the absence of one of the parties. As revealed in its official statements, the PRC will neither accept nor participate in this arbitration nor present written and oral arguments in the tribunal room. Such default of appearance makes applicable certain procedural rules. According to Article 9 of Annex VII, the Tribunal, before making its Award, is obligated to satisfy itself not only that it has jurisdiction over the dispute, but also that the claims brought by the Philippines are well-founded in fact and law. Therefore, it is necessary for the Tribunal to look into all the claims brought forward by the Philippines and all the disputes constituted by the claims in the procedural phase. The possible arguments the PRC could make should be explored during this process. This book brings together chapters selected from well-established scholars in Asia, Europe and North America addressing the issues arising from the South China Sea Arbitration. It contains five easy to read parts: origin and development of the South China Sea dispute; the jurisdiction and admissibility of the case; international adjudication and dispute settlement; legal issues arising from the case such as the legal status of the U-shaped line and islands, rocks and low-tide elevations; and the Arbitration case and its impact on regional maritime security.

This edited collection of chapters from leading oceans scholars is a timely and incisive examination of the Philippines versus China arbitration on the South China Sea. It offers multidimensional insights into the history, law and politics surrounding the South China Sea disputes for policy makers, scholars and all those interested in this pivotal region.’ Robin Warner, University of Wollongong, Australia ’This superb collection of legal approaches to arbitration in the South China Sea confirms my basic conviction: Law Trumps Power! No matter what the Arbitral Tribunal decides, the maritime disputes will be resolved on the basis of international law, not through the use of force.

The South China Sea involves a wide array of complex issues covering sovereignty over islands and reefs, maritime delimitation, maritime security, cooperation against piracy and terrorism, resource development and environmental protection, all of which require extensive research. The area's importance largely results from one-third of the world's shipping transiting through its waters and that it is believed to hold huge oil and gas reserves beneath its seabed. Several countries have made competing territorial claims over the South China Sea with such disputes being regarded as Asia's most potentially dangerous source of conflict. This series seeks to provide thoughtful consideration of these issues from a variety of interdisciplinary perspectives. It provides an opportunity for early career researchers as well as established scholars to publish theoretically informed monographs and edited volumes that engage with key issues in this region.