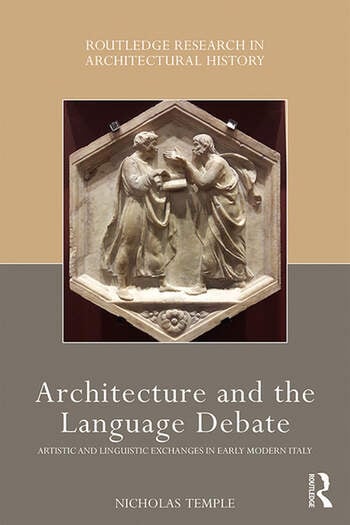 Architecture and the Language Debate: Artistic and Linguistic Exchanges in Early Modern Italy

This book examines the creative exchanges between architects, artists and intellectuals, from the Early Renaissance to the beginning of the Enlightenment, in the forging of relationships between architecture and emerging concepts of language in early modern Italy. The study extends across the spectrum of linguistic disputes during this time – among members of the clergy, humanists, philosophers and polymaths – on issues of grammar, rhetoric, philology, etymology and epigraphy, and how these disputes paralleled and informed important developments in architectural thinking and practice. Drawing upon a wealth of primary source material, such as humanist tracts, philosophical works, architectural/antiquarian treatises, epigraphic/philological studies, religious sermons and grammaticae, the book traces key periods when the emerging field of linguistics in early modern Italy impacted on the theory, design and symbolism of buildings.

CHAPTER ONE: Poetic Language in the Early Renaissance (volgare versus Latin)

"Nicholas Temple's new book is a most valuable, original and engaging fleshing out of the dry story of language, in which art and architecture is discussed and theorized from the earliest Renaissance to the passage from Rococo to Neo-Classicism." - Joseph Rykwert is the Paul Philippe Cret Professor Emeritus of Architecture at the University of Pennsylvania, USA, and recipient of the RIBA Gold Medal (2014).

"This fascinating book offers a timely and deeply reasoned historical critique of the misunderstandings around the notion of "architecture as writing," often taken as an argument to support the self-referential formal games affecting contemporary practices the world over. Built upon the observation that in order to matter culturally architecture must offer communicative atmospheres in its own universes of discourse, the book examines the relationships between oral language, writing, architecture and the culture of cities in Italy between the fifteenth and the eighteenth centuries. Awareness of such rich and complex relationships emerging around architecture at the root of modernity is a fertile ground to consider options for more responsive and ethical present practices." - Alberto Pérez-Gómez, Professor, McGill University, Canada and author of Attunement, Architectural Meaning after the Crisis of Modern Science (2016).

"Ut Pictura Poesis, Horace’s famous coupling of painting and poetry, is here transposed with insight and intelligence to architecture and language: Ut Architectura Poesis. Like written and verbal expression, architecture is dedicated to communication: writing on walls, emblematic figures on facades, geometry of public spaces, internal spatial configuration, and material expression can take the form of allegories, symbols, and metaphors. As built, architecture is perforce visible. We tend to forget it can also be legible, even rhetorical. Temple’s erudite and persuasive account of early modern (fifteenth — eighteenth century) Italian architecture culture reveals how buildings can give rise to thought, how they can show and say through means proper to the craft the reality and beauty of places in which we would like to live — then and now." - David Leatherbarrow, Professor of Architecture, University of Pennsylvania, U.S.A