Architecture and the Welfare State 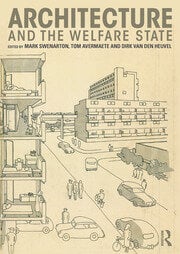 Architecture and the Welfare State

In the decades following World War Two, and in part in response to the Cold War, governments across Western Europe set out ambitious programmes for social welfare and the redistribution of wealth that aimed to improve the everyday lives of their citizens. Many of these welfare state programmes - housing, schools, new towns, cultural and leisure centres – involved not just construction but a new approach to architectural design, in which the welfare objectives of these state-funded programmes were delineated and debated. The impact on architects and architectural design was profound and far-reaching, with welfare state projects moving centre-stage in architectural discourse not just in Europe but worldwide.

1. Introduction Mark Swenarton, Tom Avermaete and Dirk van den Heuvel  Part One - Cultures and continuities  2. From Red Superblock to Green Megastructure: Municipal Socialism as Model and Challenge Eve Blau  3. The Welfare State in Flanders: De-pillarization and the Nebulous City Hilde Heynen and Janina Gosseye  4. The beginnings of high-rise social housing in the long 1940s: the case of the LCC and the Woodberry Down estate Simon Pepper  5. West Ham and the Welfare State 1945-70, a Suitable Case for Treatment? Nicholas Bullock  Part Two – Critiques and contradictions  6. Who needs ‘needs’? French Post-War Architecture and Its Critics Lukasz Stanek  7. The Open Society and its experiments: The case of the Netherlands and Piet Blom Dirk van den Heuvel  8. Where the motorways meet: Architecture and Corporatism in Sweden 1968 Helena Mattsson  9. The Märkisches Viertel in West Berlin Florian Urban  10. Alternatives to Welfare State: self-build and do-it-yourself Caroline Maniaque-Benton  Part Three – National and international  11. From Knoxville to Bidonville: ATBAT and the Architecture of the French Welfare State Tom Avermaete  12. High density without high rise: housing experiments of the 1950s by Patrick Hodgkinson Mark Swenarton  13. Matteotti Village and Gallaratese 2: design criticism of the Italian welfare state Luca Molinari  14. Exporting New Towns: The Welfare City in Africa Michelle Provoost  15. From European Welfare State to Asian capitalism: the transformation of ‘British Public Housing’ in Hong Kong and Singapore Miles Glendinning  Appendix One: Outcomes from the Liverpool Workshop 2012  Further Reading  Contributors Biographies  Acknowledgements  Index.

Mark Swenarton is James Stirling professor of architecture at Liverpool University. His writings on twentieth century social housing include Homes fit for Heroes (1981) and Building the New Jerusalem (2008). He is currently researching the housing built by Camden council under Sydney Cook between 1965 and 1973.

Tom Avermaete is professor of architecture at TU Delft. He is the author of Another Modern: the Post-War Architecture and Urbanism of Candilis-Josic-Woods (2005) and co-editor of Colonial Modern: Aesthetics of the Past, Rebellions for the Future (2010) and of the themed issue of OASE, ‘L’Afrique, c’est chic’ (2010).

Dirk van den Heuvel is head of the Jaap Bakema Study Centre at the New Institute in Rotterdam and associate professor at TU Delft. He co-edits DASH (Delft Architectural Studies on Housing) and the on-line journal Footprint. With Max Risselada he co-authored Team 10: In Search of a Utopia of the Present (2005).

"Poverty and deprivation are discussed less today than in the 70s, although the wealth gap is greater and housing for the poor is worse. This book is an essential aid to understanding the international discourse between architects during the 30 golden years and the way it was shaped, enabled and constrained by socio-political and economic frameworks." – Kate Macintosh, RIBA Journal

"This book scores highly due to the high quality of its contributions. The choice and quantity of illustrations in this book must also be given praise." – Stefan Muthesius, Building Research & Information Journal, University of East Anglia, UK

"Architecture and the Welfare State represents the opening up of new and critical pathways through its territory. Its consistently high scholarship is augmented not only by an extended and thematic bibliography, but also by the appended notes (edited by Adrian Forty) of the workshop from which the book emerged." – Gary A. Boyd, The Queen’s University, The Journal of Architecture

"The book is organised around broad themes – ‘cultures and continuities’, ‘critiques and contradictions’ and ‘national and international’ – while detailing much about the experiences of several different countries in Europe and beyond. The result is a rich and stimulating mix that is scholarly, informative and thought-provoking. The editors have successfully combined a central and coherent focus with enough eclecticism to make the book useful both in its entirety and its individual parts." – Town Planning Review, Stephen V. Ward, Oxford Brookes University, UK

"Archtecture and the Welfare State is a valuable contribution - it offers nuanced scrutiny of a period when wealth redistribution by the state was a broadly accepted process in which the built environment figured prominently. It largely delivers on its underlying claim to place the architect (and architecture) more clearly as an actor within the complex social, political, cultural and technological networks." - Lee Stickells, Fabrications, the Journal of the SAHANZ (Australia and New Zealand)