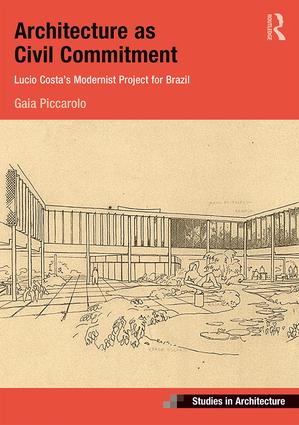 Architecture as Civil Commitment analyses the many ways in which Lucio Costa shaped the discourse of Brazilian modern architecture, tracing the roots, developments, and counter-marches of a singular form of engagement that programmatically chose to act by cultural means rather than by political ones.

Split into five chapters, the book addresses specific case-studies of Costa’s professional activity, pointing towards his multiple roles in the Brazilian federal government and focusing on passages of his work that are much less known outside of Brazil, such as his role inside Estado Novo bureaucracy, his leadership at SPHAN, and his participation in UNESCO’s headquarters project, all the way to the design of Brasilia.

Digging deep into the original documents, the book crafts a powerful historical reconstruction that gives the international readership a detailed picture of one of the most fascinating architects of the 20th century, in all his contradictory geniality. It is an ideal read for those interested in Brazilian modernism, students and scholars of architectural and urban planning history, socio-cultural and political history, and visual arts.

The young director of the School of Fine Arts

Report of a failure

A history to reconsider

New architecture, between theory and practice

Toward a State architecture

A genealogy of modern Brazilian architecture

The colonial roots of Brazilian architecture

Art and the emancipation of the masses

In search of a new monumentality

A maquisard in urban planning

Gaia Piccarolo is Adjunct Professor of History of Contemporary Architecture and Landscape at the Politecnico di Milano and member of the editorial staff of the architectural magazine Lotus International. She received her PhD in History of Architecture and Urban Planning from Politecnico di Torino in 2010, with a thesis on Lucio Costa’s public charges during the Vargas Era. She curated several exhibitions and published extensively on contemporary architecture and urban planning, with special reference to Brazilian modernism and the circulation of ideas and models between Europe and the Americas. Her research has been presented in Europe, the United States, Canada, and Brazil in the framework of international seminars and conferences.