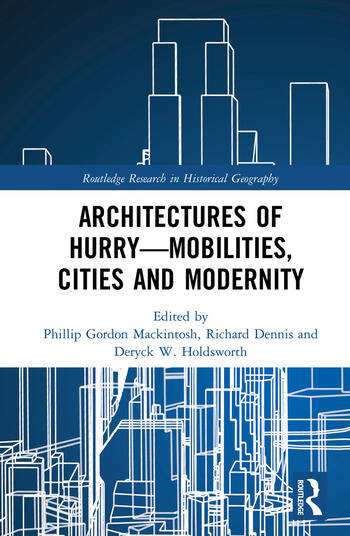 ‘Hurry’ is an intrinsic component of modernity. It exists not only in tandem with modern constructions of mobility, speed, rhythm, and time–space compression, but also with infrastructures, technologies, practices, and emotions associated with the experience of the ‘mobilizing modern’. ‘Hurry’ is not simply speed. It may result in congestion, slowing-down, or inaction in the face of over-stimulus. Speeding-up is often competitive: faster traffic on better roads made it harder for pedestrians to cross, or for horse-drawn vehicles and cyclists to share the carriageway with motorized vehicles. Focusing on the cultural and material manifestations of ‘hurry’, the book’s contributors analyse the complexities, tensions, and contradictions inherent in the impulse to higher rates of circulation in modernizing cities.

The collection includes, but also goes beyond, accounts of new forms of mobility (bicycles, buses, underground trains) and infrastructure (street layouts and surfaces, business exchanges, and hotels) to show how modernity’s ‘architectures of hurry’ have been experienced, represented, and practised since the mid nineteenth century. Ten case studies explore different expressions of ‘hurry’ across cities and urban regions in Asia, Europe, and North and South America, and substantial introductory and concluding chapters situate ‘hurry’ in the wider context of modernity and mobility studies and reflect on the future of ‘hurry’ in an ever-accelerating world. This diverse collection will be relevant to researchers, scholars, and practitioners in the fields of planning, cultural and historical geography, urban history, and urban sociology.

1. Architectures of Hurry: An Introductory Essay Part I Modes of Hurry 2. ‘She scorches now and then’: American Women and the Construction of 1890s Cycling 3. The London Bus: An Unlikely Architecture of Hurry 4. The Tales of Two Mobility Infrastructures: The Street and the Underground Railway of Buenos Aires, 1880s–1940s 5. Hurry-Slow: Automobility in Beijing, or a Resurrection of the Kingdom of Bicycles? Part II Local and Global Infrastructures 6. An Architecture of Sluggishness: Organic Infrastructure and Anti-mobility in Toronto, 1870–1910 7. Keeping Pedestrians in their Place: Technologies of Segregation on the Streets of East London 8. Hurried Exchanges: Hybrid Office Buildings and Their Uses in the Late Nineteenth Century 9. Shelter from the Hurry? Hospitality in Montreal, 1836–1913 Part III Practices of Mobility 10. Pedestrianism, Money and Time: Mobilities of Hurry in George Gissing’s The Private Papers of Henry Ryecroft 11. ‘We’re going to move … I can’t rush backwards and forwards, I’ll go mad – I am sure of it.’ Representations of Speed and Haste in English Life Writing, 1846–1958 12. Epilogue: Mobilizing Hurrysome Historical Geographies

Phillip Gordon Mackintosh is Associate Professor of Geography, Brock University. He is the author of Newspaper City: The Liberal Press and Toronto’s Street Surfaces, 1860–1935 (2017), numerous publications on turn-of-the-twentieth-century cultures of urban reform and city planning, historical cycling, and urban historical geographies of class, gender, and race, and is co-editor of The World of Niagara Wine (2013).

is Emeritus Professor of Geography, University College London (UCL). His books include Cities in Modernity (2008) and English Industrial Cities of the Nineteenth Century (1984). He has written for numerous publications on housing, public transport, and imaginative literature in nineteenth- and twentieth-century London and Toronto. He is an editorial committee member of The London Journal, and previously was associate editor of Journal of Urban History and series editor of Cambridge Studies in Historical Geography.

is Emeritus Professor of Geography, Pennsylvania State University. He is the co-author of Homeplace: The Making of the Canadian Dwelling over Three Centuries (1998) and was co-editor of the Historical Atlas of Canada, Volume III, Addressing the Twentieth Century (1990). He has authored numerous journal articles on office buildings, folk and industrial housing, and insights from historical hotel guest registers.