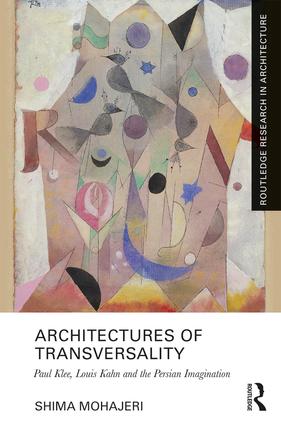 Architectures of Transversality investigates the relationship between modernity, space, power, and culture in Iran. Focusing on Paul Klee’s Persian-inspired miniature series and Louis Kahn’s unbuilt blueprint for a democratic public space in Tehran, it traces the architectonics of the present as a way of moving beyond universalist and nationalist accounts of modernism. Transversality is a form of spatial production and practice that addresses the three important questions of the self, objects, and power. Using Deleuzian and Heideggerian theory, the book introduces the practices of Klee and Kahn as transversal spatial responses to the dialectical tension between existential and political territories and, in doing so, situates the history of the silent, unrepresented and the unbuilt – constructed from the works of Klee and Kahn – as a possible solution to the crisis of modernity and identity-based politics in Iran.

"Shima Mohajeri ably brings the later philosophy of Martin Heidegger on place as gathering and opening into conversation with Gilles Deleuze’s dynamic model of becoming and heterogeneity, which territorializes by gathering together milieus that are nomadically distributed, in order to address the failure of modern Iran to distinguish between the task of building a modern nation and Westernization. Her insightful and sharp analysis of this failure is enhanced by her account of architect Louis Kahn’s indirect resistance to the politicized agenda of Iran with his immanent denunciation of archaic forms of power. Mohajeri eloquently mourns the return to a mythical past, the labyrinth of tradition that denied the transversal field of architectural creativity an opportunity to open up a space of movement between cultural and artistic and political and economic activities to create a democratic urban space."

"This book finds hints of a ‘transversal’ modernity in Paul Klee’s engagement with the Persian miniature tradition, and in Louis Kahn’s assignment for the polarized policies of the Shah regime in Iran. In these brief, unfinished and fleeting encounters, Shima Mohajeri sees an unfulfilled promise of a non-Orientalist and non-imperialist modernity to come—a modernity that would have come to life out of a locale with the simultaneous growth of that place. She perceives in Kahn’s vision a quiet criticism of pseudo-democratic modernization, and a gesture towards activating the modern cultural and political institutions, as well as the public spaces for the fulfilment of citizen agency.   Her historical research and erudite discussion of philosophers, artists, miniature painters and architects that spans a wide range of time and space is relevant for multiple disciplines and area studies, including art and architecture history, critical theory, European, North American and West Asian studies."

Shima Mohajeri is a Lecturer of Architectural History at the University of Washington, USA.