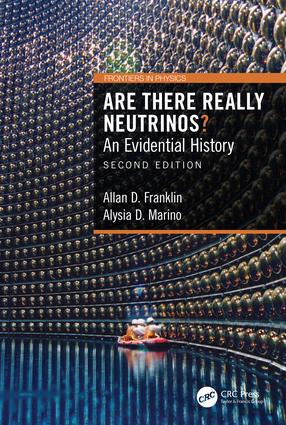 Are There Really Neutrinos?

This intriguing and accessible book examines the experiments on neutrino oscillations. It argues that this history gives us good reason to believe in the existence of neutrinos, a particle that interacts so weakly with matter that its interaction length is measured in light years of lead. Yet, the scientific process has provided evidence of the elusive neutrino. Written in a style accessible to any reader with a college education in physics, Are There Really Neutrinos? is of interest to students and researchers alike. This second edition contains a new epilogue highlighting the new developments in neutrino physics over the past 20 years.

"Franklin’s excellent book is especially welcome and timely. It tells us much about the history of the neutrino and related physics…. It deserves a wide readership."

1. The Road to the Neutrino. 2. The Neutrino Hypothesis. 3. Towards a Universal Fermi Interaction. 4. Fermi’s Theory: The Final Act. 5. ‘Observing’ the Neutrino: The Reines-Cowan Experiments. 6. How Much? The Mass of the Neutrino. 7. How Many? Whose? 8. The Missing Solar Neutrinos. 9. Neutrino Oscillations. 10 Conclusion: There Are Neutrinos. 11. Epilogue.

Allan D. Franklin is professor of physics emeritus at the University of Colorado. He began his career as an experimental high-energy physicist and later changed his research area to history and philosophy of science, particularly on the roles of experiment. In 2016, Franklin received the Abraham Pais Prize for History of Physics from the American Physical Society. He is the author of twelve books including most recently Shifting Standards: Experiments in Particle Physics in the Twentieth Century, What Makes a Good Experiment? Reasons and Roles in Science, and Is It the Same Result? Replication in Physics

Alysia D. Marino is a member of the physics faculty at the University of Colorado. She has been a researcher in experimental neutrino physics for over 20 years, studying neutrino oscillations with solar neutrinos and with accelerator-generated neutrino beams.

This long-standing, widely respected series was founded in 1961 in an effort to put forward coherent works that summarize developments in the most active and interesting areas of physics. It continues to serve that need, including textbooks, monographs, lecture notes, and professional manuals that aid in offering synthetic, authoritative accounts of the present state of the art in key subject areas of wide interest to physicists. The caliber of authors published in the series speaks to the high standards of its publication: R. P. Feynman, D. Pines, L. P. Kadanoff, R. Hofstadter, J. Schwinger, and many others.