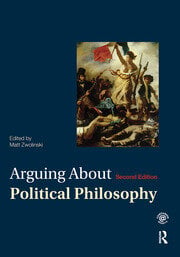 This second edition of Arguing About Political Philosophy is the most complete, up-to-date, and interdisciplinary anthology of its kind. Its selections cover both classic philosophical sources such as Hobbes and Rousseau, and contemporary figures such as Robert Nozick and G.A. Cohen. But additional excerpts from economists, psychologists, novelists, and legal theorists help students from diverse intellectual backgrounds to connect with and appreciate the problems and distinctive methodology of political philosophy.

This second edition also goes beyond any other anthology on the market in its coverage of traditionally under-represented views such as libertarianism, neo-socialism, feminism, and critical race theory. And it is one of the only anthologies to go beyond A Theory of Justice in its coverage of the political thought of John Rawls.

The volume is divided into 3 parts – Foundational Concepts; Government, the Economy and Morality; and Applied Political Philosophy – covering core arguments and emerging debates in topics like:

The new companion website offers valuable resources for instructors and students alike, including sample quizzes, exams, and writing assignments, extensive study questions for each reading, and an online version of the "What’s Your Political Philosophy" self-assessment.

Social Contract Theory and its Critics

Robert Axelrod – Excerpts from The Evolution of Cooperation

David Hume – "Of the Original Contract"

Murray Rothbard – "Society without a State," The Libertarian Forum

Stanley Milgram -  "The Perils of Obedience"

Michael Sandel – "The Procedural Republic and the Unencumbered Self"

Part 2 - Government, The Economy, and Morality

Karl Marx and Frederick Engels – "Critique of the Gotha Program"

Adam Smith, excerpts from The Wealth of Nations

Henry George – "The Injustice of Private Property in Land,"

David Schmidtz – "The Institution of Property"

G.A. Cohen - Why Not Socialism

Philippe Van Parijs - "A Basic Income for All"

Jean Jacques Rousseau – "Discourse on the Origins of Inequality,"

a. Democratic Deliberation and Voting

Amy Gutmann and Dennis Thompson – "Moral Disagreement in a Democracy,"

Michael Huemer – "Is There a Right to Immigrate?"

Peter Singer – Excerpts from The Life You Can Save: Acting Now to End World Poverty

Matt Zwolinski is Associate Professor of Philosophy at the University of San Diego, co-director of USD’s Institute for Law and Philosophy, and the founder of and frequent contributor to the popular Bleeding Heart Libertarians blog. He is the author of numerous articles in political philosophy on topics such as exploitation, price gouging, and sweatshop labor.

Browsing the table of contents of Zwolinski's Arguing About Political Philosophy got me eager to teach Introduction to Political Philosophy next time using this text. The readings are well chosen and combine classic texts and state of the art recent work on a broad range of crucial topics within political philosophy better than any other introductory text I know of. I will surely be using this excellent text.

It’s unusual for a textbook to possess both breadth and depth, but Zwolinski achieves just that. Debates over the meaning of central political concepts, and their reflection in several salient current political issues, are presented through a range of carefully selected readings representing both mainstream and other positions, historical and contemporary. The result is a strongly engaging introduction to the concerns of political philosophy.

This book is like a time machine, right from your own armchair or library carrel! One of the things students find scary about philosophy is the emphasis on "mastering thinkers." The recent resurgence in interest in studying philosophy has been caused in part by a reorientation toward problems. You can't study problems without time travel: what would Hume have thought of Rawls? How would Hobbes have reacted to Martin Luther King? Arguing About Political Philosophy is a portal to the kind of intellectual time travel that reveals why philosophy is at the core of a liberal education.

Matt Zwolinski has assembled a lively anthology that retains a commitment to high standards while being extremely student-friendly as well. Arguing about Political Philosophy is above all about ideas, and it is refreshing to see so many diverse ideological perspectives brought together in one teaching text. Well-organized and judiciously selected, this collection provides an ideal foundation on which to build your own world-class course in political philosophy.

This excellent anthology presents political philosophy and theory within the social sciences as well as the liberal arts. Its thematic units combine selections from historical and contemporary canonical works with well-chosen supplemental texts ranging from literature to economics. It also lets students encounter an unusually wide range of normative positions, and so makes clear that the central problems of political philosophy remain live questions for debate.