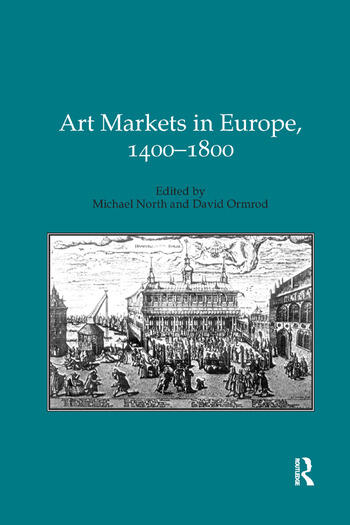 The reinvention of art-history during the 1980s has provided a serious challenge to the earlier formalist and connoisseurial approaches to the discipline, in ways which can only help economic and social historians in the current drive to study past societies in terms of what they consumed, produced, perceived and imagined. This group of essays focuses on three main issues: the demand for art, including the range of art objects purchased by various social groups; the conditions of artistic creativity and communication between different production centres and artistic millieux; and the emergence of art markets which served to link the first two phenomena. The work draws on new research by art historians and economic and social historians from Europe and the United States, and covers the period from the late Middle Ages to the early nineteenth century.

Contents: Introduction; Art and its markets, Michael North & David Ormrod; Manuscript acquisition by the Burgundian court and the market for books in the 15th-century Netherlands, Wim Blockmans; Some aspects of the origins of the art market in 15th-century Bruges, Maximiliaan P. J. Martens; Is art a barometer of wealth? Medieval art exports to the far north of Europe, Jan von Bonsdorff; Artistic enterprise and Spanish patronage: the art market during the reign of Isabel of Castile (1474-1504), Mari-Tere Alvarez; The Italian Renaissance courts’ demand for the arts: the case of d’Este of Ferrara (1471-1560), Guido Guerzoni; The Roman art market in the 16th and 17th century, Volker Reinhardt; The Upper German trade in art and curiosities before the Thirty Years War, Renate Pieper; Pricing the unpriced: how Dutch 17th-century painters determined the selling price of their work, Marten Jan Bok; Dealer-dealer pricing in the mid 17th-century Antwerp-to-Paris art trade, Neil de Marchil, Hans Van Miegroet and Matthew E. Raiff; Probate inventories, public sales and the Parisian art market in the 17th century, Antoine Schnapper; Art auctions in Germany during the 18th century, Thomas Ketelsen; Arenas of connoisseurship: auctioning art in later Stuart England, Brian Cowan; The origins of the London art market, 1660-1730 , David Ormrod; Commerce and the commodity: graphic display and selling new consumer goods in 18th-century England, Maxine Berg and Helen Clifford; Intrigue, jewellery and economics: court culture and display in England and France in 1780s, Marcia Pointon; Bibliography; Index.

Michael North is Professor and Head of the Dept of History at the Ernst-Moritz-Arndt UniversitÃ¤t, Greifswald,Germany; David Ormrod is Senior Lecturer in Economic & Social History at the University of Kent at Canterbury, UK.