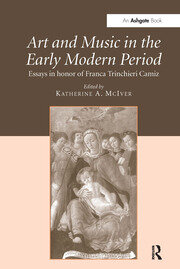 Art and Music in the Early Modern Period: Essays in Honor of Franca Trinchieri Camiz

The relationship between music and painting in the Early Modern period is the focus of this collection of essays by an international group of distinguished art historians and musicologists. Each writer takes a multidisciplinary approach as he or she explores the interface between music performance and painting, or between music and art theory. The essays reflect a variety and range of approaches and offer methodologies which might usefully be employed in future research in this field. The volume is dedicated to the memory of Franca Trinchieri Camiz, an art historian who worked extensively on topics related to art and music, and who participated in some of the conference panels from which many of these essays originate. Three of Professor Camiz's own essays are included in the final section of this volume, together with a bibliography of her writings in this field. They are preceded by two thematic groups of essays covering aspects of musical imagery in portraits, issues in iconography and theory, and the relationship between music and art in religious imagery.

Contents: Introduction. Art and Music in Italy: The music of devotion: image, voice and the imagination in a Madonna of Humility by Domenico di Bartolo, Andrew Ladis; Musical images for devotions: Benedetto Coda’s altarpiece for the Rosary, Katherine Powers; Music, patrons and politics: A re-assessment of Zaganelli’s altarpiece for Rolando Pallavicino and DomItilla Gambara, Katherine A. McIver; Architecture for ’divine hymns’: the organ of Antonio da Sangallo the Younger for the Church of Santo Spirito in Sassia, Eunice D. Howe; Portrait of a lutenist at the Museo Civico of Como: an inquiry, Mariagrazia Carlone; Portraying Claudio Merulo, 'that great fountain whose value deserved no other prize than heaven itself', Rebecca Edwards; Musical portraits of female musicians at the northern Italian courts in the 1570s, Laurie Stras; Humanism and the arts: parallels between Alberti’s On Painting and Guglielmo Ebreo’s On ... Dancing, Barbara Sparti; Lomazzo’s Trattato ... della pittura and Galilei’s Fronimo: picturing music and sounding images in 1584, Leslie Korrick. Art and Music in Northern Europe: Representations of musicians in medieval Christian iconography of Ireland and Scotland as local cultural expression, Ann Buckley; The Stall Of Jubal: A Flemish reflection of Italian humanism, Herbert Turrentine; Variations on the theme of The Planets’ Children, or medieval musical life according to the housebook’s astrological imagery, Zdravko Blazekovic; ’All things in this world is but the musick of inconstancie’: music, sensuality and the sublime in 17th-century Vanitas Imagery, Linda Phyllis Austern; Musical indulgence and pleasurable sound in 17th-century Dutch art, Roy Sonnema. A Tribute to Franca Trinchieri Camiz: Music performance and healing in renaissance Rome revealed by text and images, Franca Trinchieri Camiz; Biblical music and dance through renaissance eyes, Franca Trinchieri Camiz; Music settings to poems by Michelangelo and Vittoria Col

Katherine A. McIver is Associate Professor of Art History at The University of Alabama at Birmingham, USA. She is also the editor of Art and Music in the Early Modern Period: Essays in Honor of Franca Trinchieri Camiz (Ashgate, 2003).

'Camiz must be considered one of the most important scholars contributing to early modern artistic and musical culture. These essays are equally important to our understanding of both art and music in this period. I strongly recommend them and the whole collection to all scholars who seek fresh perspectives on the early modern period.' The Art Book '... imaginative, rich, and thoughtful...' Renaissance Quarterly