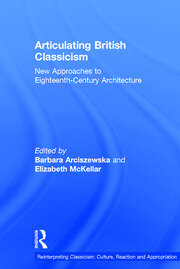 Whereas the past decades have seen a profound reconsideration of eighteenth-century visual culture, the architecture of that century has undergone little evaluation. Its study, unlike that of the early modern period or the twentieth century, has continued to use essentially the same methods and ideas over the last fifty years. Articulating British Classicism reconsiders the traditional historiography of British eighteenth-century architecture as it was shaped after World War II, and brings together for the first time a variety of new perspectives on British classicism in the period. Drawing on current thinking about the eighteenth century from a range of disciplines, the book examines such topics as social and gender identities, colonialization and commercialization, notions of the rural, urban and suburban, as well as issues of theory and historiography. Canonical constructions of Georgian architecture are explored, including current evaluations of the continental intellectual background, the relationship with mid seventeenth-century Stuart court classicism and the development of the subject in the twentieth century.