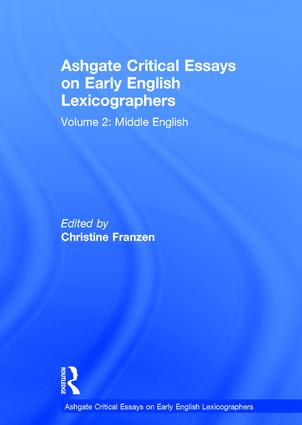 The teaching of Latin remained important after the Conquest but Anglo-Norman now became a language of instruction and, from the thirteenth century onwards, a language to be learned. During this period English lexicographers were more numerous, more identifiable and their works more varied, for example: the tremulous hand of Worcester created an Old English-Latin glossary, and Walter de Bibbesworth wrote a popular contextualized verse vocabulary of Anglo-Norman country life and activities. The works and techniques of Latin scholars such as Adam of Petit Point, Alexander Nequam, and John of Garland were influential throughout the period. In addition, grammarians' and schoolmasters' books preserve material which in some cases seems to have been written by them. The material discussed ranges from a twelfth-century glossary written at a minor monastic house to four large alphabetical fifteenth-century dictionaries, some of which were widely available. Some material seems to connect with the much earlier Old English glossaries in ways not yet fully understood.

Christine Franzen was formerly at the School of English, Film and Theatre with Media Studies, Victoria University of Wellington, New Zealand.