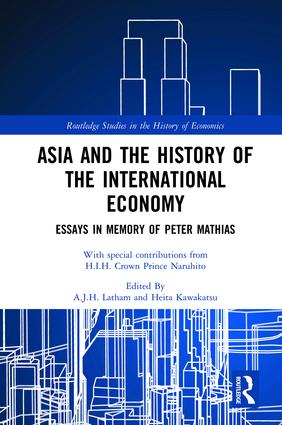 Asia and the History of the International Economy

This collection of essays sheds new light on many aspects of Asia’s integration with the international economy. H.I.H. Crown Prince Naruhito discusses the problems of controlling water in the interest of urban development. He first examines the problems encountered on the River Thames in relationship to the growth of London in the eighteenth century, and then relates his findings to Japan where similar problems arose with respect to the expansion of Edo (Tokyo). Other chapters looking at the eighteenth century examine the development of plant collecting in Asia and the wider world in the interest of the economy and leisure, Japan’s connections with the outside world by way of the Dutch East India Company (VOC), and the Dutch acquisition of the knowledge of the Japanese language at their base at Dejima Island, Nagasaki. India features next with a chapter showing how India was crucial in initiating the industrial revolution in Britain, by stimulating British manufacturers to copy the fine textiles made by hand loom weavers there. This is followed by a chapter showing how in the late nineteenth century India was the central pivot in the entire international economic system, based on its trading surplus with China. Other discussions trace the role of Scotland as a centre of heavy industry and shipbuilding, with Scottish companies dominating the shipping lanes of Asia. A further chapter shows how British connections with Asia, in this case Shanghai, brought problems of debt and non payment, and outlines the steps taken to try to control the situation. Elsewhere problems arose in Bangkok over the quality of rice being supplied to European merchants in the 1920s, leading to a decline in sales. Finally there is a discussion of Japanese commercial policy towards Africa in the inter-war period. This book will be of interest and use to students, researchers, and general readers interested in Asia’s role in world economic development.

2. Barges and Bargemasters on the Thames in the Eighteenth Century (H.I.H. Crown Prince Naruhito)

6. Knowledge and Use of Japanese by the Dutch on Dejima Island, Nagasaki (L.M. Cullen)

8. India and the Emergence of the International Economy: A Synopsis (A.J.H. Latham)

9. Steamship Competition in Asia in the Late Nineteenth Century: Britain and the United States (Masami Kita)

11. The Dispute over the Quality of Rice Exports from Siam to Europe in the 1920s (Toshiyuki Miyata)

A.J.H. Latham was Senior Lecturer in International Economic History at the University of Wales, Swansea (now Swansea University), and is in active retirement. He is co-editor of many studies including Intra-Asian Trade and Industrialization, and The Evolving Structure of the East Asian Economic System since 1700, both published by Routledge.

is the Governor of Shizuoka Prefecture since 2009. Prior, he was President of Shizuoka University of Art and Culture and Professor of Economic History and Vice Director of the International Research Center for Japanese Studies in Kyoto. He is co-editor of many studies including Intra-Asian Trade and Industrialization and The Evolving Structure of the East Asian Economic System since 1700, both published by Routledge.