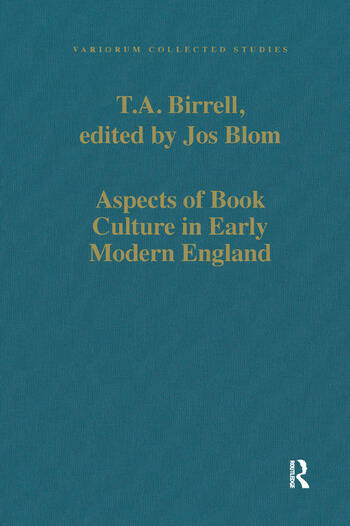 Thomas Anthony Birrell (1924-2011) was a man of many parts. For most of his working life he was Professor of English Literature in the University of Nijmegen, The Netherlands, where he was famous for his lively, humoristic and thought-provoking lectures. He was the author of some very popular literary surveys in Dutch, one of which - a history of English literature - has had seven editions so far. However, first and foremost he was a bibliographer and a book historian. The present collection contains fifteen of his book-historical articles, two reviews and one published version of a lecture for the illustrious ’Association Internationale de Bibliophilie’. The lecture - with a wealth of illustrations - about the British Library as the ’Custodian of the Unique’ gives one a sense of Birrell’s ability to present an audience with a complicated topic in comprehensible, but not simplified, terms. The reviews serve as a statement of principle of how to tackle the subject of ’English readers and books’ and the standards that ought to apply. The articles demonstrate Tom Birrell’s in-depth knowledge, dedication and scholarship. He once said that he felt that he could have talked to the 17th-century London booksellers on an equal footing and his work convinces one that they would have enjoyed these conversations. Aspects of Book Culture was edited by Birrell’s former pupil, colleague, friend and fellow-bibliographer Jos Blom.

Contents: Editorial preface; Part I The Significance of Book Auctions: John Dryden’s purchases at two book auctions, 1680 and 1682; Books and buyers in 17th century English auction sales; John Locke at three English book auctions, December 1681 to June 1682. Part II Book Collectors and Reading Habits: The reconstruction of the library of Isaac Casaubon; The printed books of Dame Margaret Nicollson: a pre-Reformation collection; Reading as pastime: the place of light literature in some gentlemen’s libraries of the 17th century; Review of Bibliotheca Higgsiana: A Catalogue of the Books of Dr Griffin Higgs (1589-1659) by P.S. Morrish (Oxford, 1990); Review of Private Libraries in Renaissance England: a Collection and Catalogue of Tudor and Early Stuart Booklists, eds R.J. Fehrenbach and E. Leedham-Green, Volumes I and II (Binghampton/New York, 1992/3); Mary of Nemmegen: provenance, context, genre; The library of Sir Edward Sherburne (1616-1702). Part III Publishers and Their Influence: The influence of 17th century publishers on the presentation of English literature; The making of a bookseller: the journals of John Petheram (1807-1858); The circle of John Gage (1786-1842): Director of the Society of Antiquaries, and the bibliography of medievalism; ’A sentimental journey’ through Holland and Flanders, 6 June to 3 July 1815, by John Gage. Part IV Bibliographers and Libraries: Anthony Wood, John Bagford and Thomas Hearne as bibliographers; Some rare Scottish books in the Old Royal Library; The British library: custodian of the unique; The BM duplicate sales 1769-1832 and their significance for the early collections; Bibliography of T.A. Birrell's works; Selective index.

'For those who had the pleasure and privilege of knowing Tom Birrell, this book will serve as reminder of his quintessence; for those who did not know him, here is the best possible introduction to a man of massive learning, infinite wit and great humanity, and also to a variety of approaches to "book culture".' Publishing History 'The volume prints eighteen essays and reviews [that] show [Birrell] not only as an historian of collections, readers, and libraries, but also as one who was alert to subjects that have now assumed considerable interest.' Library & Information History 'This book should be compulsory reading for all young people embarking on careers in the antiquarian book trade, rare-book librarianship, or the history of the book; for older hands there will be no need for compulsion: its charms, rewards, and enviable invention will make it irresistible.' Book Collector