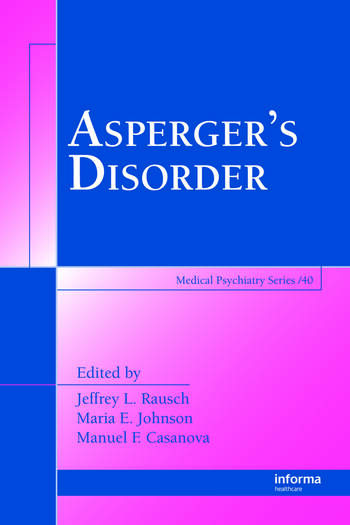 Today at least seven million children and adolescents are afflicted with Asperger’s disorder. Examining the etiology, diagnosis, and treatment of this condition, this volume provides the necessary guidance to psychiatrists and neurologists so they can correctly differentiate Asperger’s from other neurodevelopmental disorders. The book discusses brain morphology, chemistry, and function; related neuropathological findings; and screening instruments and imaging techniques. Also discussed are the genetics, epigenetics, and proteomics of Asperger's, relevant gene-environment interaction, social assimilation in the classroom, and biological treatment. Case studies enhance the text.

JEFFREY L. RAUSCH is Professor and Case Distinguished Chair in Psychiatry and Health Behavior, The Medical College of Georgia, Augusta, Georgia, USA. He received his M.D. from the Medical College of Georgia, Augusta, Georgia, USA. Dr. Rausch is also a member of over 15 professional organizations, including the American Psychiatric Association, Society of Biological Psychiatry, and Psychiatric Research Society, of which he served as President in 2003. He has been named one of the Best Doctors in America from 1994 through 2008, and has been awarded both the Humanitarian Award and the creativity award from the Medical College of Georgia as well as the Distinguished Fellow award from the American Psychiatric Association. In 2005, he was named one of the top One Hundred Health Professionals. Dr. Rausch’s specialty areas include psychiatric genetics, neuroendocrinology, molecular neuroscience, and clinical psychopharmacology.

MARIA E. JOHNSON is Medicine-Psychiatry Consultation-Liaison at Gracewood Hospital for the Developmentally Disabled, Augusta, Georgia, USA. She obtained her M.D., completed training and psychopharmacology fellowship at the Medical College of Georgia, Augusta, Georgia, USA. Dr. Johnson is a young investigator in the areas of Asperger’s Disorder, Autism Spectrum Disorders, intellectual disability, and depression.

MANUEL F. CASANOVA is Professor of Psychiatry, University of Louisville, Louisville, Kentucky, USA. Dr. Casanova received his M.D. from the University of Puerto Rico, San Juan, Puerto Rico. Having helped establish two of the most successful brain banks in the US, The Johns Hopkins Brain Resource Center and the Brain Bank Unit of the Clinical Brains Disorders Branch at the National Institutes of Mental Health, Dr. Casanova was bestowed honorary appointments as a scientific expert for the Armed Forces Institute of Pathology and professorial lecturer for the Department of Forensic Science at George Washington University. He is well published in a multitude of areas, including neuronal morphometry immunocytochemistry, neurochemistry, and autoradiography.

I think there is a clear need for this book as there is increasing recognition of the autistic spectrum as distinct from simply hard core autism, and also either a distinct rise in either the prevalence or recognition of these disorders or both, plus a recognition of the great burden on school systems, families and teachers as they attempt to cope with what are life long disabilities in the absence of any clear cut biological treatments. The book looks well organized and comprehensive.
– John O’Reardon, MD, Department of Psychiatry, Director of Treatment Resistant Depression Clinic, University of Pennsylvania, Philadelphia, PA