Associative Learning and Representation: An EPS Workshop for N.J. Mackintosh
A Special Issue of the Quarterly Journal of Experimental Psychology, Section B 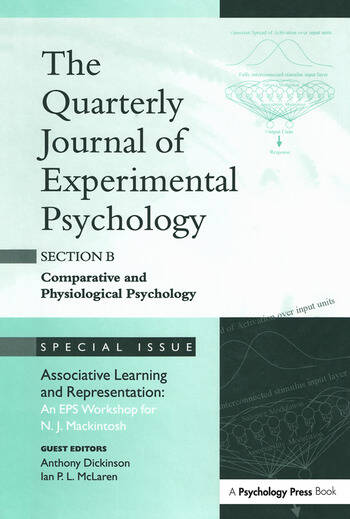 Associative Learning and Representation: An EPS Workshop for N.J. Mackintosh: A Special Issue of the Quarterly Journal of Experimental Psychology, Section B

The papers published in this Special Issue of The Quarterly Journal of Experimental Psychology, Section B, are based upon presentations at a workshop on "Associative Learning and Representation" which was sponsored by the Experimental Psychology Society at Emmanuel College, Cambridge. The Workshop celebrated the contribution of Professor Nicholas Mackintosh to animal learning and conditioning in particular and experimental psychology in general in the year of his retirement from the Chair of Psychology at the University of Cambridge. The papers collected here focus on issues that are of relevance to learning in both humans and other animals, being particularly concerned with the nature of representation and how representations are developed and deployed. The topics addressed included stimulus representation and perceptual learning, discrimination learning, learned irrelevance, retrospective revaluation, discriminative control, and spatial learning.