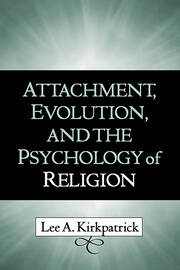 In this provocative and engaging book, Lee Kirkpatrick establishes a broad, comprehensive framework for approaching the psychology of religion from an evolutionary perspective. Within this framework, attachment theory provides a powerful lens through which to reconceptualize diverse aspects of religious belief and behavior. Rejecting the notion that humans possess religion-specific instincts or adaptations, Kirkpatrick argues that religion instead emerges from numerous psychological mechanisms and systems that evolved for other functions. This integrative work will spark discussion, debate, and future research among anyone interested in the psychology of religion, attachment theory, and evolutionary psychology, as well as religious studies. It will also serve as a text in advanced undergraduate and graduate-level courses.

From Lee Kirkpatrick, winner of the APA Division 36 William James Award for outstanding and sustained contributions to the psychology of religion

Lee A. Kirkpatrick, PhD, is Associate Professor and Director of Graduate Studies in Psychology at the College of William and Mary in Virginia. He has published numerous research articles and book chapters on topics related to adult attachment, the psychology of religion, and evolutionary psychology.

"In this highly engaging, wide-ranging, and gracefully written book, Kirkpatrick moves from his own innovative work on attachment processes and religious phenomena to a much broader, multidimensional analysis of religion as an outcome of evolution. The book stands out from other writings on evolution and religion, which tend to have a narrow focus (on cognition or ritual or mystical experience, for example) and to see religion as a unitary adaptation. In contrast, Kirkpatrick argues persuasively that religion is best explained by a confluence of several different evolved mechanisms, each with its own primary, nonreligious function."--Phillip R. Shaver, PhD, Department of Psychology, University of California, Davis

"Kirkpatrick has provided a dazzling and insightful analysis of the psychology of religion. Groundbreaking and gripping from start to finish, the book takes readers on a tour of religious phenomena, from the origins of belief to the nature of religious leaders and their followers. The result is the most incisive and scientifically sound analysis of religion I have seen, using principles drawn from modern evolutionary psychology. It’s a landmark publication, and sure to form the center of lively debate for years to come."--David M. Buss, PhD, Department of Psychology, University of Texas at Austin

"This is a masterful example of scholarship aimed at integrating an attachment and evolutionary theoretical approach to the wide and far-reaching domain of the psychology of religion. Kirkpatrick is the world’s leading expert on attachment theory and religion, and in this book he has expanded the argument to encompass a broader perspective, one that places the psychology of religion squarely in the emerging field of evolutionary psychology and thus links it with the larger orbit of sciences. The writing is rich with research whose data argue in a compelling way that religious phenomena match the predictions of an attachment-evolutionary framework. Other approaches are acknowledged but are challenged with the question of why they work, if they do. Written with a high level of sophistication, the book is nonetheless extremely accessible. Kirkpatrick clearly loves his material. His logic is keen, his writing beautiful, his topic and message timeless."--Raymond F. Paloutzian, PhD, Department of Psychology, Westmont College