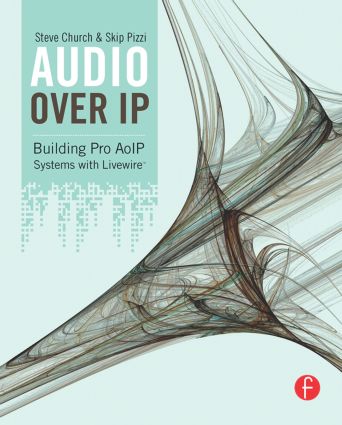 Position yourself at the forefront of audio and broadcast studio technology by learning audio over IP. You will gain knowledge of IP network engineering as it applies to audio applications, and then progress to a full understanding of how equipment built on Ethernet and Internet Protocol are used in today's audio production and broadcast facilities for the transporting, mixing and processing of pro-quality audio. A chapter on integrating Voice-over IP telephony (VoIP) to pro-audio and broadcast facilities is also included.

Using the popular Livewire technology, you will learn how to design, construct, configure and troubleshoot an AoIP system, including how to interface with PCs, VoIP telephone PBXs, IP codecs, and the Internet. See how AoIP systems work in practice, and discover their distinct advantages over older audio infrastructures. With its complete introduction to AoIP technology in a fun, highly readable style, this book is essential for audio professionals who want to broaden their knowledge of IP-based studio systems--or for IT experts who need to understand AoIP applications.

*The Arguments for AoIP

*AoIP in Use Today

*What Can You Do with It?

5. Designing and Building with AoIP

*IAX as a SIP Alternative

*Using VoIP to Connect to the Telco Network

*And When It Does: Achieving Low-Delay

Steve Church is the President of Telos Systems. Before founding the company, he was a Technical Director and talk host for radio stations such as WMMS/Cleveland, and WFBQ/Indianapolis. As co-inventor of Livewire, he is a pioneer in IP Audio technology. Steve designed the first DSP-based product for radio broadcast applications, the Telos 10 digital hybrid. He was the first to design a product using MP3 and played a key role in popularizing the codec for PC and Internet music applications.
Skip Pizzi is Contributing Editor at Radio World magazine, where he writes "The Big Picture? column that appears in every issue. He has also spent 11 years in various positions at Microsoft, initially as Audio Systems Engineer in the Interactive Media Production unit, and most recently as Senior Policy Analyst for the company's Entertainment & Devices Division. Previously, Skip served as Technical Editor, Editor and Editor-in-chief at Broadcast Engineering and BE Radio (now Radio) magazines. Earlier he spent 13 years at NPR, where he served as technical director for numerous award-winning programs, and founded the company's technical training program. He is also a published author (see below). Skip is a frequent speaker at international conferences on broadcasting, audio and music, and currently co-chairs the Surround Sound Audio Task Group of the U.S.'s National Radio Systems Committee. Skip also serves as a judge for the National Television Academy's "Technical Emmy? Awards. He holds a B.A. from Georgetown University, where he studied International Economics, Electrical Engineering and Fine Arts.