Autobiography as Philosophy
The Philosophical Uses of Self-Presentation 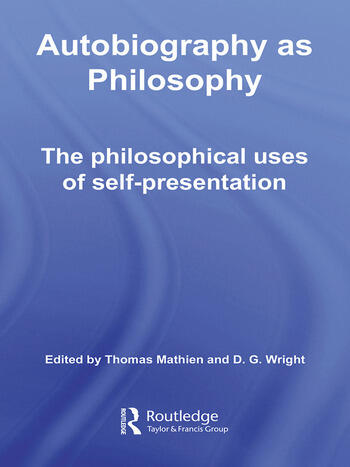 Autobiography as Philosophy: The Philosophical Uses of Self-Presentation

Most philosophical writing is impersonal and argumentative, but many important philosophers have nevertheless written accounts of their own lives.

Filling a gap in the market for a text focusing on autobiography as philosophy, this collection discusses several such autobiographies in the light of their authors' broader work, and considers whether there are any philosophical tasks for which life accounts are particularly appropriate.

Instead of the common impersonal and argumentative forms of ordinary philosophical discussion, these autobiographical texts are deeply personal and largely narrative or explanatory. The contributors to this book examine the philosophical significance of philosophers’ autobiographies and whether or not there are broadly philosophical tasks for which this sort of writing is particularly suited. Autobiography as Philosophy contains a general discussion about the relation between philosophical and autobiographical writing, and essays on the specific writings of Augustine, Abelard, Montaigne, Descartes, Vico, Hume, Rousseau, Newman, Mill, Nietzsche, Collingwood and Russell by specialists on the works of these individuals.

Original and distinctive in its efforts to think about the writings of historically recognized philosophers as communicative acts governed by their own distinctive interests and purposes, the book reveals that it is as much about the texts and the authors as it is about their doctrines and arguments. As a result the book steps back from many of the issues of substantive philosophical discussion to reflect on certain forms of writing as means to philosophical ends, to consider what those ends have included.

1. Introduction  2. Philosophers’ Autobiographies  3.The Confessions of Saint Augustine: Accessory to Grace  4. Who is Peter Abelard?  5. Philosophy Without Heroism: Montaigne and the Vanity of Autobiography  6. Exile and Philosophy: Descartes  7. Scrissela da filosofo: The Life of Giambattista Vico Written by Himself  8. Hume’s ''Life'' and the Virtues of the Dying  9. Portraying Nature: Rousseau’s Reveries as Philosophy and Art  10. John Henry Newman and Autobiographical Philosophy  11. Mill’s Autobiography  12. The Subject of Nietzsche’s Ecce Homo  13. R.G. Collingwood: Philosophy as Autobiography  14. Is Bertrand Russell a Logical Fiction?