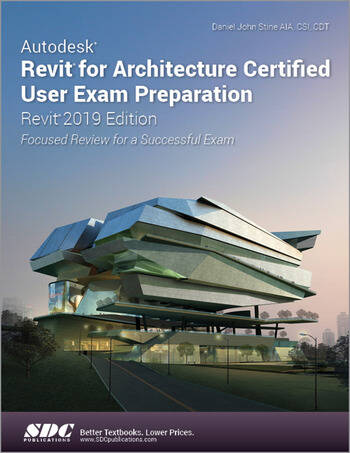 In the competitive world in which we live it is important to stand out to potential employers and prove your capabilities. One way to do this is by passing one of the Autodesk Certification Exams. A candidate who passes an exam has credentials from the makers of the software which indicate you know how to use their software. This can help give you an edge over other potential interviewees when applying for a job.

is intended for the Revit user who has about 40 hours of real-world experience with Autodesk Revit software. This book will help guide you in your preparation for the Autodesk Certified User, Revit for architecture exam. By passing this exam you are validating your Revit skills, and are well on your way to the next level of certification.

Committed to furthering the design profession, Stine teaches graduate architecture students at North Dakota State University (NDSU) and has lectured for interior design programs at NDSU, Northern Iowa State, and University of Minnesota, as well as Dunwoody's new School of Architecture in Minneapolis. As an adjunct instructor, Dan previously taught AutoCAD and Revit for twelve years at Lake Superior College. Dan is a member of the American Institute of Architects (AIA), Construction Specifications Institute (CSI), and Autodesk Developer Network (ADN), and is a Construction Document Technician (issued by CSI). He has presented live webinars for ElumTools, ArchVision, Revizto and NVIDIA. Dan writes about design on his blog, BIM Chapters, and in his textbooks published by SDC Publications.