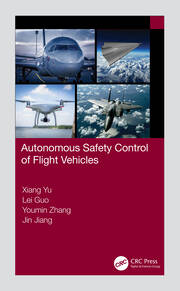 Aerospace vehicles are by their very nature a crucial environment for safety-critical systems. By virtue of an effective safety control system, the aerospace vehicle can maintain high performance despite the risk of component malfunction and multiple disturbances, thereby enhancing aircraft safety and the probability of success for a mission.

This book presents a systematic methodology for improving the safety of aerospace vehicles in the face of the following occurrences: a loss of control effectiveness of actuators and control surface impairments, the disturbance of observer-based control against multiple disturbances, actuator faults and model uncertainties in hypersonic gliding vehicles, and faults arising from actuator faults and sensor faults. Several fundamental issues related to safety are explicitly analyzed according to aerospace engineering system characteristics while, focusing on these safety issues, the safety control design problems of aircraft are studied and elaborated in detail by using systematic design methods. The research results illustrate the superiority of the safety control approaches put forward.

The expected reader group for this book is undergraduate and graduate students but also industry practitioners and researchers.

Xiang Yu is a Professor with the School of Automation Science and Electrical Engineering, Beihang University, Beijing, China. His research interests include safety control of aerospace engineering systems, guidance, navigation, and control of unmanned aerial vehicles.

Lei Guo, appointed as "Chang Jiang Scholar Chair Professor", is a Professor with the School of Automation Science and Electrical Engineering, Beihang University. His research interests include anti-disturbance control and filtering, stochastic control, and fault detection with their applications to aerospace systems.

Youmin Zhang is a Professor in the Department of Mechanical, Industrial and Aerospace Engineering, Concordia University. His research interests include fault diagnosis and fault-tolerant control, cooperative guidance, navigation and control (GNC) of unmanned aerial/space/ground/surface vehicles.