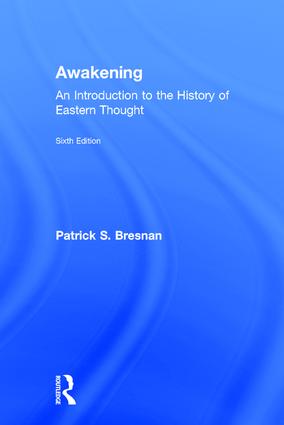 An Introduction to the History of Eastern Thought, 6th Edition

Awakening: An Introduction to the History of Eastern Thought

engages students with lively anecdotes, essential primary and secondary sources, an accessible writing style, and a clear historical approach. The text focuses primarily on India, China, and Japan, while showing the relationships that exist between Eastern and Western traditions. Patrick Bresnan consistently links the past to the present, so students may see that Eastern traditions, however ancient their origins, are living traditions and relevant to modern times. Updates to the Sixth Edition include a new introduction as well as new approaches to problem areas throughout the text, but with special emphasis in Chapter 5 (Ashtanga Yoga), Chapter 10 (Basic Teaching of Shakyamuni Buddha), Chapter 12(Mahayana Buddhism: Madhyamaka section) and Chapter 18 (Chan Buddhism: regarding the relationship of Chan Buddhism to Zen Buddhism). In addition, all references and source material have been brought up to date. The companion website includes two new videos and many new photos, produced by the author.

New to this Sixth Edition:

• A new introduction that provides a helpful overview of each of the nineteen chapters and important connections between them;

• An improved explanation of the nature of Vedanta philosophy, and a more logical organization of the Key Elements of the Upanishads in Chapter 3;

• An extensive rewrite of Chapter 5, which deals with the subject of Ashtanga Yoga as expressed in the Yoga Sutras of Patanjali;

• A total recasting of the teaching of Nagarjuna in the Madhyamaka section of Chapter 12;

• A clearer and easier to understand presentation of the teaching of the Dao De Jing in Chapter 14;

• A major revision of Chapter 18 so as to clearly distinguish Chinese Chan from Japanese Zen;

• Greater emphasis throughout, where pertinent, on the role of meditation practice in all Eastern traditions;

• Revised and updated Questions for Discussion at the end of each chapter;

"The high praises attached to Awakening should not come as a surprise. This is the sixth edition of Awakening, and Bresnan has made significant changes in each edition—clarifying his presentations, honing the questions, and adding new elements. . . . [It]is truly a testament to a great educator who is well-versed in a wide range of Eastern traditions and philosophies."

Part I Hinduism and Related Traditions of South Asia

Chapter 1: India Before the Vedas

The Lay of the Land

South Asia Before the Vedic Age

The Theory of Indo-Aryan Migrations

Chapter 2: Veda and the Vedas

An Overview of Vedic Cosmology

Chapter 3: Introduction to the Upanishads

Key Elements of the Upanishads

An Overview of Vedanta Cosmology

The Bhagavad Gita and the Mahabharata

The Bhagavad Gita as Metaphor

The General Nature of Yoga

The "Eight Limbs" of Ashtanga Yoga

Chapter 8: A Millennium of Strife

Part II Shakyamuni Buddha and the Early Development of Buddhism

The Doctrine of Anatman

Diversity and Religious Elements in Mahayana

The Nature of Buddha

Other Voices from the Period of a Hundred Philosophers

Later Developments in the Evolution of Confucianism

The Shinto Shrine and Festival

Buddhism in the Tarim Basin

The Establishment of Buddhism in Tibet

The General Character of Buddhism in Tibet

A Historical Overview of Buddhism in Tibet

Zen and the Arts

is a retired professor of history and philosophy at De Anza College, Cupertino, California, where he created a four-quarter course, Introduction to Eastern Philosophy, dealing with the historical development of the major philosophical traditions of Asian countries. That, plus extensive travel and study in Asia, resulted in the production of the college-level text Awakening: An Introduction to the History of Eastern Thought. Other books by Patrick S. Bresnan include Them: The Adventures of a College Classroom Teacher (2012) and The Amazing Meditation Revolution: West Meets East (2013).