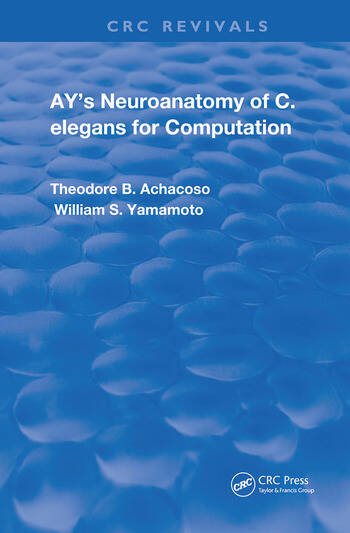 First published in 1992, AY's Neuroanatomy of C. elegans for Computation provides the neural circuitry database of the nematode Caenorhabditis elegans, both in printed form and in ASCII files on 5.25-inch diskettes (for use on IBM® and compatible personal computers, Macintosh® computers, and higher level machines). Tables of connections among neuron classes, synapses among individual neurons, gap junctions among neurons, worm cells and their embryonic origin, and synthetically derived neuromuscular connections are presented together with the references from which the data were compiled and edited. Sample data files and source codes of FORTRAN and BASIC programs are provided to illustrate the use of mathematical tools for any researcher or student interested in examining a natural neural network and discovering what makes it tick.

Theodore B. Achacoso, M.D. (born 1961, Iba, Zambales, Philippines) received his Bachelor of Science degree in Biology from the University of the Philippines - Diliman at the age of 18, and his Doctor of Medicine degree from the University of the Philippines - Manila at the age of 22. After medical internship at the Philippine General Hospital, Dr. Achacoso trained and researched in neuroscience, particularly in computer-assisted neuroimaging, and in pharmacology, particularly in fertility regulation. He was Clinical Assistant Professor of Neurology and Science Research Specialist of Pharmacology at the College of Medicine of the University of the Philippines - Manila when he came to the United States as Visiting Assistant Professor of Medical Informatics at the Department of Computer Medicine of The George Washington University (Washington, D.C.) in 1988., In the United States, Dr. Achacoso has taught, pursued research, and published in medical computation and imaging, in theoretical and computational neurobiology, and in biomathematical modeling and reverse engineering of the Caenorhabditis elegans nervous system. He introduced the terms artificial ethology and computational neuroethology, represented the synaptic and electrotonic connections of the C. elegans nervous system into matrix form, and investigated properties of this natural neural network. Dr. Achacoso is with the faculty of the Department of Computer Medicine of The George Washington University School of Medicine., William S. Yamamoto, M.D. (born 1924, Cleveland, Ohio, U.S.A.) received his A.B. degree in Chemistry from Park College, Parkville, MO in 1945, and his Doctor of Medicine and Master of Science (Hon.) degrees from the University of Pennsylvania, Philadelphia in 1949 and 1971, respectively. Dr. Yamamoto is a respiratory physiologist, and has taught physiology, biomathematics, biomedical engineering, statistics, and related medical subjects at the University of Pennsylvania, UCLA, and The George Washington University. His research activities are in mathematical modeling of physiological systems, in medical computation, and in real and artificial nervous systems. Most of his publications are in the control of respiration in mammals, some are in health care industry computing, especially in communications, and recent ones include the identification of verbs in computer programs of physiological models., Dr. Yamamoto is a professor at the Department of Computer Medicine (formerly the Department of Clinical Engineering) of The George Washington University School of Medicine, and was chairman of this department from 1971 to 1989. He is on the editorial board of IEEE Transactions on Biomedical Engineering and Computers in Biomedical Research, among others, and was on the editorial board oiAnnual Review of Biophysics and Bioengineering. Dr. Yamamoto was with the National Neural Circuitry Database Task Force, National Academy of Science, and is a member of the Biotechnology Resources Review Committee, National Institutes of Health.