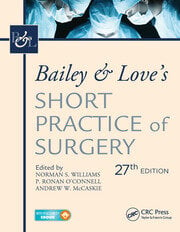 Bailey & Love is the world famous textbook of surgery. Its comprehensive coverage includes the scientific basis of surgical practice, investigation, diagnosis, and pre-operative care. Trauma and Orthopaedics are included, as are the subspecialties of plastic and reconstructive, head and neck, cardiothoracic and vascular, abdominal and genitourinary surgery. The user-friendly format includes photographs, line diagrams, learning objectives, summary boxes, biographical footnotes, memorable anecdotes and full-colour page design. This book's reputation for unambiguous advice make it the first point of reference for student and practising surgeons worldwide.

PART ONE: BASIC PRINCIPLES: The Science of Surgery

Senior Clinical Advisor to the Secretary of State for Health, Past President, The Royal College

of Surgeons of England 2011–2014, Emeritus Professor of Surgery, Barts and The London School

Professor Sir Norman Williams was until recently Professor of Surgery at Barts and The London, Queen Mary’s School of Medicine and Dentistry and Director of the National Centre for Bowel Research and Surgical Innovation (1986-2016) and retains the title of Emeritus Professor of Surgery. He trained in London, Bristol, Leeds and Los Angeles His main clinical interests have been sphincter preservation and reconstructive colorectal surgery, and his scientific interests concentrated on GI motility and anorectal physiology. He is now the Senior Clinical Advisor to the Secretary of State for Health and on the Board of St George’s NHS Foundation Trust Hospital..

Professor Williams is co-author of Surgery of the Anus, Rectum and Colon and was a founding trustee and Chairman of Bowel & Cancer Research and is now the President of this charity. He has been joint editor of Bailey and Love’s Short Practice of Surgery since the 22nd Edition.

He was knighted for services to surgery in 2015.

Professor P. Ronan O’Connell is Head of Surgical Specialties at the UCD School of Medicine, Dublin Ireland and Consultant Surgeon at St Vincent’s University Hospital Dublin, Ireland. He graduated from Trinity College Dublin in 1979 and trained as general surgeon with sub-specialty interest in Coloproctology. Having completed a fellowship in colon and rectal surgery at the Mayo Clinic, Rochester MN, USA, he spent time as a Senior Lecturer with Professor Sir Norman Williams at the Royal London Hospital. He was appointed consultant surgeon at the Mater Misericordiae Hospital Dublin in 1990 where he served until his current appointment in 2007.

Professor O’Connell has served as an editor of the British Journal of Surgery and associate editor of Diseases of the Colon and Rectum. He has been editor in chief for the European Surgical Association and joint editor of Bailey and Love’s Short Practice of Surgery for the 25th, 26th and now 27th editions, having contributed chapters to the 23rd and 24th editions. Apart from his editing, Prof O’Connell is widely published in the areas of IBD, colorectal cancer and pelvic floor physiology. He is a Council member of the Royal College of Surgeons in Ireland and holds ad hominum fellowships of the Glasgow and Edinburgh Royal Colleges. He is a past President of the European Society of Coloproctology and honorary fellow of the American Surgical Association and the American Society of Colon and Rectal Surgeons.

Professor of Orthopaedic Surgery and Head of Department of Surgery

Professor Andrew McCaskie is Professor of Orthopaedic Surgery and Head of Department of Surgery at the University of Cambridge. He trained in Leeds, Leicester and Newcastle upon Tyne, where he was Professor of Orthopaedic Surgery until moving to Cambridge in 2013. His clinical interest is the lower limb, and particularly the treatment of osteoarthritis, seeking to develop repair and regenerative therapies at early stages of disease. He is the Director of the Arthritis Research UK Tissue Engineering Centre which brings together UK clinicians, engineers and biologists to develop stem and stromal cell therapy for early osteoarthritis.

This book simply smacks of class; I have had the privilege of reviewing the hardback edition which is a robust and physically heavy book.  This is a powerful heavyweight textbook that seems to cover most surgical specialties and is suitable for a global audience. Even better, its appeal is widespread throughout various sectors of the medical and surgical community. If you are a practicing physician and just need one surgical textbook as a reference source for your personal or departmental library, this excellent book could fit the bill. It is also very useful for the undergraduate or postgraduate medic no matter where you are in the world. So it is very adaptable to a number of end users.
Dr Harry Brown, Glycosmedia, May 2018, Full review: http://www.glycosmedia.com/bailey-and-loves-short-practice-of-surgery-2/

This is a high-quality book on an international level that provides significant additional illustrations and discussion of problems encountered. It is thus a highly valuable resource for students, residents, and surgeons who will be practicing outside the U.S. (or doing surgical volunteerism). There is nothing comparable to the Bailey textbooks. This 27th edition nicely updates and enhances information from the 26th edition, while remaining true to the purpose of the original.
Carol Scott-Conner, MD, PhD, MBA (University of Iowa Hospitals and Clinics)