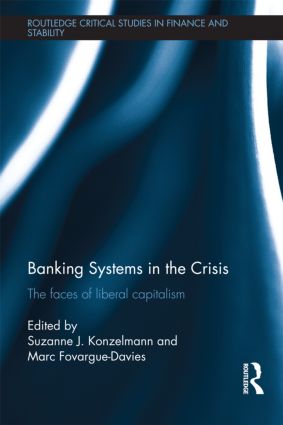 Banking Systems in the Crisis

The 2008 financial crisis has severely shaken confidence in liberal economic theory and policy. However, the sharply divergent experiences of the six Anglo-Saxon ‘liberal market economies’ (LMEs) suggest that the reality is not so simple. This book traces the evolution of liberal capitalism, from its rebirth amidst the challenges of the 1970s to its role in the genesis of the 2008 crisis – and debates the assumptions underpinning the liberal capitalist paradigm.

Close examination reveals variety within liberal capitalism. Not only was there the familiar, "hands off" libertarian approach adopted by the US, UK and Ireland, but more bounded, better regulated and apparently more stable varieties of economic liberalism also emerged, through the more pragmatic approach taken by Canada, Australia and New Zealand.

The evidence is compelling. Whereas the American, British and Irish financial systems were severely damaged by the crisis, those of Canada, Australia and New Zealand proved more robust. This volume explores the degree to which these divergent experiences were a result of better and more intensive supervision, differences in business or political culture, broader commitment to social norms, and the pace of liberalisation.

Detailed comparative case studies reveal fundamental differences in the economic and political environments in which economic liberalisation took place, in approaches to finance and in the degree to which it was seen to be an engine for growth. The book concludes that this had a major influence on the evolving economic and financial systems, and consequently, their relative resilience when confronted with the challenges of the 2008 crisis.

Suzanne J. Konzelmann is Director of the London Centre for Corporate Governance and Ethics and a Reader in Management at Birkbeck, University of London, UK.

Marc Fovargue-Davies is a Research Associate at the London Centre for Corporate Governance and Ethics at Birkbeck, University of London, UK.

The 2007-8 Banking Crash has induced a major and wide-ranging discussion on the subject of financial (in)stability and a need to revaluate theory and policy. The response of policy-makers to the crisis has been to refocus fiscal and monetary policy on financial stabilisation and reconstruction. However, this has been done with only vague ideas of bank recapitalisation and ‘Keynesian’ reflation aroused by the exigencies of the crisis, rather than the application of any systematic theory or theories of financial instability.