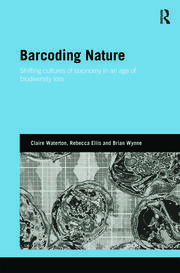 Barcoding Nature: Shifting Cultures of Taxonomy in an Age of Biodiversity Loss

DNA Barcoding has been promoted since 2003 as a new, fast, digital genomics-based means of identifying natural species based on the idea that a small standard fragment of any organism’s genome (a so-called ‘micro-genome’) can faithfully identify and help to classify every species on the planet. The fear that species are becoming extinct before they have ever been known fuels barcoders, and the speed, scope, economy and ‘user-friendliness’ claimed for DNA barcoding, as part of the larger ferment around the ‘genomics revolution’, has also encouraged promises that it could inspire humanity to reverse its biodiversity-destructive habits.

This book is based on six years of ethnographic research on changing practices in the identification and classification of natural species. Informed both by Science and Technology Studies (STS) and the anthropology of science, the authors analyse DNA barcoding in the context of a sense of crisis – concerning global biodiversity loss, but also the felt inadequacy of taxonomic science to address such loss. The authors chart the specific changes that this innovation is propelling in the collecting, organizing, analyzing, and archiving of biological specimens and biodiversity data. As they do so they highlight the many questions, ambiguities and contradictions that accompany the quest to create a genomics-based environmental technoscience dedicated to biodiversity protection. They ask what it might mean to recognise ambiguity, contradiction, and excess more publicly as a constitutive part of this and other genomic technosciences.

Barcoding Nature will be of interest to students and scholars of sociology of science, science and technology studies, politics of the environment, genomics and post-genomics, philosophy and history of biology, and the anthropology of science.

1. Introduction  2. DNA Barcoding: Revolution or Conciliation?  3. What’s In a Barcode? The Use, Selection and De-Naturalisation of Genetic Markers  4. A Leg Away for DNA: Mobilizing, Compiling and Purifying Material for DNA Barcoding  5. Extending the Barcoding Frontier  6. Archiving Diversity: BOLD  7. BOLI as Redemptive Technoscientific Innovation  8. What Is It? Identifying Nature and Valuing Utility  9. Barcoding Nature: Final Reflections

Claire Waterton is Senior Lecturer in Environment and Society and Co-Director of the Centre for the Study for Environmental Change (CSEC) within the Sociology Department of Lancaster University.

is Lecturer in the Lancaster Environment Centre at Lancaster University.

is Professor of Science Studies at CSEC Lancaster University, and from 2002--2012 was co-PI and Associate Director of the ESRC Centre, Cesagen.