Baseball and American Culture
Across the Diamond 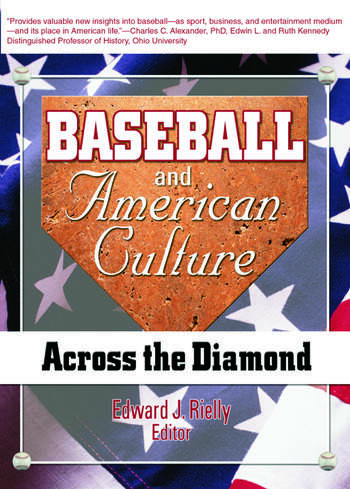 Baseball and American Culture: Across the Diamond

Baseball and American Culture: Across the Diamond is a thoughtful look at baseball's impact on American society through the eyes of the game's foremost scholars, historians, and commentators. Edited by Dr. Edward J. Rielly, author of Baseball: An Encyclopedia of Popular Culture, the book examines how baseball and society intersect and interact, and how the quintessential American game reflects and affects American culture. Enlightening and entertaining, Baseball and American Culture presents a multidisciplinary perspective on baseball's involvement in virtually every important social development in the United States—past and present.

Baseball and American Culture examines baseball’s unique role as a sociological touchstone, presenting scholarly essays that explore the game as a microcosm for American society—good and bad. Topics include the struggle for racial equality, women’s role in society, immigration, management-labor conflicts, advertising, patriotism, religion, the limitations of baseball as a metaphor, and suicide. Contributing authors include Larry Moffi, author of This Side of Cooperstown: An Oral History of Major League Baseball in the 1950s and Crossing the Line: Black Major Leaguers, 1947-1959, and a host of presenters to the 2001 Cooperstown Symposium on Baseball and American Culture, including Thomas Altherr, George Grella, Dave Ogden, Roberta Newman, Brian Carroll, Richard Puerzer, and the editor himself.

Baseball and American Culture features 23 essays on this fascinating subject, including:
“On Fenway, Faith, and Fandom: A Red Sox Fan Reflects”
“Baseball and Blacks: A Loss of Affinity, A Loss of Community”
“The Hall of Fame and the American Mythology”
“Writing Their Way Home: American Writers and Baseball”
“God and the Diamond: The Born-Again Baseball Autobiography”

Baseball and American Culture: Across the Diamond is an essential read for baseball fans and historians, academics involved in sports literature and popular culture, and students of American society.