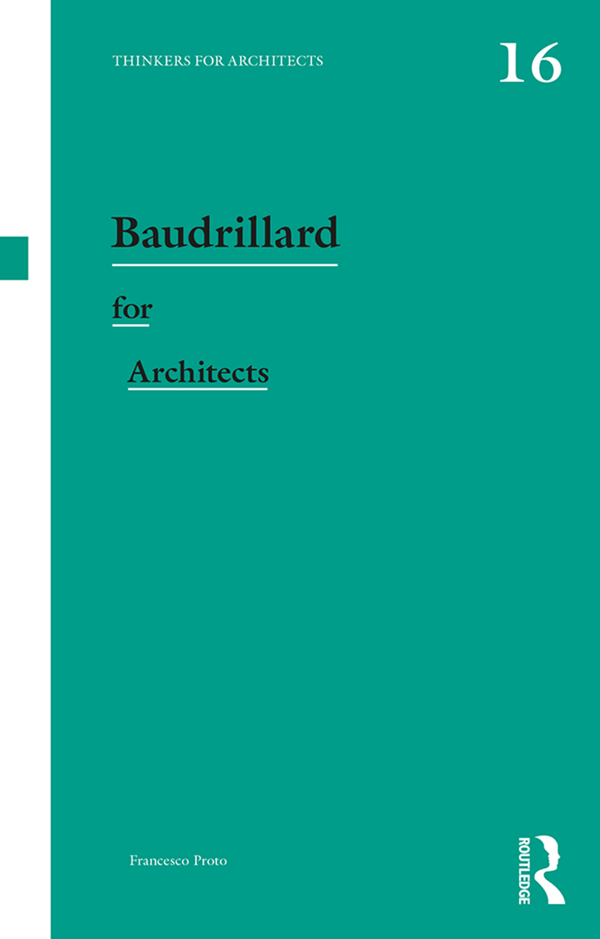 Marginalized due to the deployment of both a highly specialized jargon and a novel stylistic approach meant to upset established norms and conventions, Baudrillard's thought has suffered from the lack of an accessible, consistent and comprehensive exposition able to make it relevant to diverse contemporary disciplines. As a result, its impact on architecture has always been confined to academia.

By presenting an introductory but in-depth formalization of Baudrillard's interest in architecture and related fields, this book makes intelligible his philosophical premises thus showing, through the prism of architecture, their relevance and persuasiveness today. Key concepts such as the object system, the code, simulation, hyperreality and precession, to name a few, are addressed in the light of the specially reconceptualized key construct of ambience, thus emphasizing how the mutual concerns of architecture, urban studies and cultural studies provide a fertile ground for debate.

Such an approach, which focuses on the contradictions inherent in contemporary society from the vantage point of Baudrillard's original involvement in architectural analysis, philosophy and criticism, is one which students, practitioners and scholars alike from as diverse disciplines as architecture, interior design and urban studies – but also fine art, anthropology, sociology, economics, human geography, social psychology and cultural studies to start with – will benefit from immensely.

"Baudrillard for Architects presents a provocative recalibration of Baudrillard’s thought around design, urbanism, and architecture. Using ambience as a keyword, Francesco Proto traces the expansion of a totalizing semiurgical manipulation of the real along an increasing scale from objects, modular components of systems, buildings, campuses, suburban shopping centres, theme parks, cities, countries and the entire planet. A welcome renewal of the Baudrillard Scene."

--- Gary Genosko, Professor of Communication Studies, Ontario Tech University, and author of Baudrillard and Signs and McLuhan and Baudrillard: The Masters of Implosion

“Baudrillard for Architects is not just a "let me explain this to you" kind of book, it's a treatise that truly has the potential to impact theoretical discourse in architecture. The examples are so powerful and simply put that they compel the reader to re-think things at large and small scales. This is an outstanding addition to an already well-respected series, and I'm grateful to find that Baudrillard is a thinker who should really move to the head of the line.

The format, brevity, and style of presenting the ideas is also very original and effective.”

Francesco Proto is an architect and Senior Lecturer in History and Theory of Architecture at Oxford Brookes University School of Architecture, as well as a member of the editorial board of the International Journal of Baudrillard Studies. He has published widely on Jean Baudrillard and his previous book, Mass Identity Architecture, was the first to foreground Baudrillard’s interest and concern with architecture. His current research focuses on the relationship between subjectivity and the city and Baudrillard's re-reading of Jacques Lacan.

Architects have often looked to thinkers in philosophy and theory to find design ideas or in search of a critical framework for practice. Yet architects, and students of architecture, can struggle to navigate thinkers’ writings. It can be daunting to approach original texts with little appreciation of their contexts. And existing introductions seldom explore architectural material in any detail.

This original series offers clear, quick and accurate introductions to key thinkers who have written about architecture. Each book summarises what a thinker has to offer for architects. It locates their architectural thinking in the body of their work, introduces significant books and essays, helps decode terms and provides quick reference for further reading. If you find philosophical and theoretical writing about architecture difficult, or just don’t know where to begin, this series will be indispensable.