Becoming a Romanov. Grand Duchess Elena of Russia and her World (1807‚Äì1873) 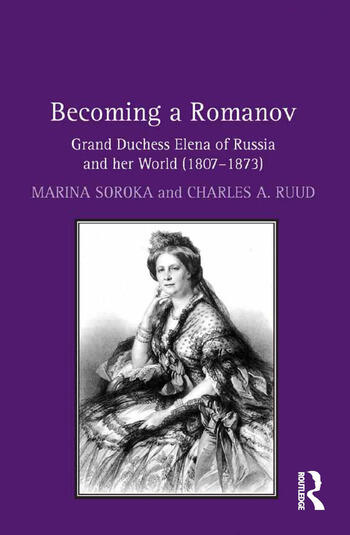 Becoming a Romanov. Grand Duchess Elena of Russia and her World (1807‚Äì1873)

The Russian Great Reforms of the 1860s were the last major modernizing effort by the Romanov dynasty. From 1855 to 1861, Grand Duchess Elena, born Princess Charlotte of W√É¬ºrttemberg (1807-1873), acted as the spokeswoman for the reform-minded circles of Russian society, bringing before her nephew Emperor Alexander II a group of civic-minded experts who formed the core of the committee that prepared the greatest and most complex of the reforms, the abolition of serfdom in Russia. The Grand Duchess‚Äôs involvement in these crucial events in Russian history highlights the considerable influence aristocratic women had in Russian society, quite unlike women of the same class and status in Western Europe. A study of the Grand Duchess Elena of Russia offers a new understanding of Russian and international events of the time, the Romanovs‚Äô role in them, the degree of autonomy enjoyed by high-born women in Russia and the ways in which new ideas gained ground in the nineteenth-century Russian empire. Based on abundant and largely unused archival sources, published documents and literature of the period in French, Russian, German, Italian and English, this is the first book about Grand Duchess Elena and it expertly interweaves the story of a woman‚Äôs life with that of Imperial Russian high politics.

"This welcome volume makes a contribution to Russian studies in two different areas. The book provides the first and long-needed biography of an unusually accomplished woman who figured prominently in the political and social life of Russia in the mid-nineteenth century. And, through an examination of the upbringing and court life of the grand duchess, the chapters add significantly to women‚Äôs history in the imperial period. As Marina Soroka and Charles A. Ruud summarize, she "was able to participate in Russian social, cultural and political life because aristocratic women ... exercised significant control over family and society" (p. xi). The volume is especially strong in charting Elena Pavlovna‚Äôs transformation from a weepy German princess, caught in a loveless marriage to Emperor Paul‚Äôs youngest son, into a brilliant salonni√®re and supporter of the Red Cross, the Petersburg conservatory, and the emancipation of the serfs."

"The book by Soroka and Ruud presents in detail the lifetime of this distinguished personality of the Russian imperial house... The authors show that, despite the strict gender-based separation of social functions in the royal family in the nineteenth century, Grand Duchess Elena Pavlovna was committed to high-profile public causes and took an active part in public life. It is certainly to the authors' credit that a huge number of facts stemming from archival materials and hard-to-access publications of correspondence of that time have been brought into scholarly circulation. All of the above will serve as the basis for future research. The book is an interesting read not only for specialists working on modern Russian history but for everyone interested in women's and gender history, as well as court society and its everyday life."

"Soroka and Ruud are imbued with great sympathy for Elena, which, while legitimate, can lead to an increased level of stylization. Deconstructing this is highly recommended for ambitious readers. You won't regret it and your efforts will ultimately be rewarded with profound insights into a fascinating world."

"The book fufils a valuable role in giving a more nuanced portrait of Elena Pavlovna than has appeared before in any English-language account. Its value rests as much on the insights and vignettes scattered through the book as on any fundamental re-interpretation of the nature of the country's social and political life. It can be read with profit by any student of late Imperial Russia."