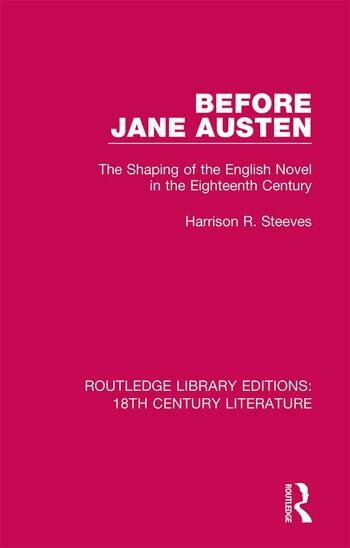 Before Jane Austen: The Shaping of the English Novel in the Eighteenth Century

Few centuries have seen greater changes in social perspective and guiding ideas than the eighteenth century; literature in every Western country was a powerful instrument not only in recording these changes but in bringing them about. In England, the rise and development of a new literary form – the novel – graphically mirrors that great transition in social ideology, often with rare entertainment.

Originally published in 1965, in the words of Professor Steeves: ‘This volume is to deal with the years in which the novel was still an experiment. At the beginning of the eighteenth century there was no novel. By the end, novels of every description were being published, not in dozens, but in hundreds. The badness of the product was universally recognized, but perhaps fifty had emerged out of the ruck of mediocrity, some tolerable, some good, and some great.’

The author tells us that it is the province of the novel ‘to deal with what seems to be real people, in situations which have the tang of the life of the time and which pose significant problems related to that life.’ He examines the changing view of the social scene in the works of the great novelists of the period – Defoe, Richardson, Fielding, Smollett, and Sterne – and in the less familiar but still significant novels of others from the time. The discussion ends with Austen because she comes ‘exactly at the end of a century highly important in intellectual and cultural history, and at the beginning of another century equally epoch-making…. Miss Austen can properly be called the first modern English novelist, the earliest to be read with the feeling that she depicts our life, and not a life placed back somewhere in history, or off somewhere in imagined space’.