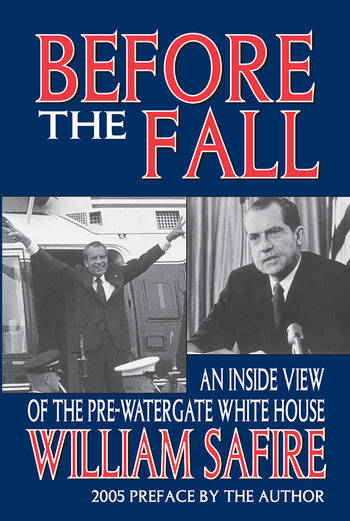 Before the Fall: An Inside View of the Pre-Watergate White House

William Safire was a speechwriter for Richard Nixon from 1968 to 1973. During that time, as a Washington insider, Safire was able to observe the thirty-seventh president in his entirety: as noble and mean-spirited; as good and bad; as a man desirous of greatness. Rarely has there been a White House memoir more intimate or revealing in its exploration of the great events that took place "before the fall" of Watergate. In this anecdotal history, Nixon and his associates come alive, not as caricatures, but as men with high and low purpose: Henry Kissinger, William Rogers, H. R. (Bob) Haldeman, John Ehrlichman, Charles Colson, and Arthur Burns struggle not just for power, but for ideals. As William Safire says in his Prologue: "In this memoir, which is neither a biography of [Nixon] nor an autobiography of me nor a narrative history of our times, there is an attempt to figure out what was good and bad about him, what he was trying to do and how well he succeeded, how he used and affected some of the people around him, and an effort not to lose sight of all that went right in examining what went wrong." The book is divided into ten sections, in which run three main themes: the President, the Partisan, and the Person. As a president, Safire discusses Nixon and the Vietnam War, foreign policy, economics, and race relations. As a partisan, he discusses Nixon's attempt to form an alignment across party lines, successful in many respects before the president tolerated the excesses that eventually corrupted his administration. And as a person, Safire finds that Nixon was a mixture of Woodrow Wilson, Machiavelli, Theodore Roosevelt, and Shakespeare's Cassius--an idealistic conniver evoking the strenuous life while he thinks too much. This paperback edition of a classic primary source for historians includes a new introduction by its author. Studded with direct quotations that put the reader in the room where history was being made, Before the Fall is a realistic, shades-of-gray study of the Nixon years.