Being Against the World
Rebellion and Constitution 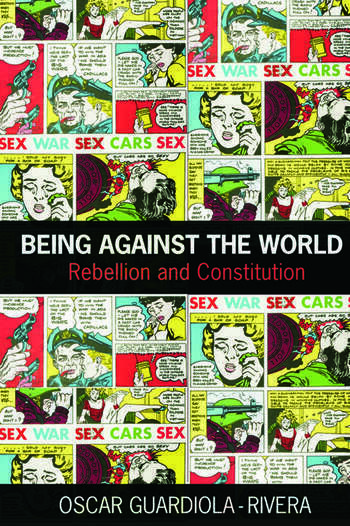 Being Against the World: Rebellion and Constitution

How can we save politics from the politician? How can we save ourselves? This book looks at the example of those who leave the city and break the social contract, rebellious exiles and freedom fighters escaping the wheel of necessity, and learns from them.

Chapter 3. An Introduction to Fetishism (With a Plea for Materialism)

Chapter 4. The Most Sublime of Fetishists

Chapter 5. Let Us Make Love (And Listen To Death From Above): Notes on Psychoanalysis

Chapter 6. The Love that Seeks No Other: Further Notes …

Chapter 8. Rip It Up and Start Again

Chapter 10. Guevara’s Choice: On Revolution as a Radical Organising Principle

‘Although social revolution is supposed to come from the people, theorists as a rule ignore the complex set of popular myths, beliefs and practices which constitute the actual ideology of common people. In a close analysis of the Latin American scene, Oscar brings these two dimensions together, and the result of their short-circuit is a shattering explosion from which the theory of ideology will never be able to recuperate and regain its comfortable peace.’

Slavoj Zizek, author of The Parallax View, and How To Read Lacan.

‘Being Against the World unveils a world of multiple ontologies that is rendered credible by a novel materialist realism, one that finally leaves behind the division between "observer" and "reality" that has been central to all modern ways of thinking and social design. Building bridges between the most farsighted intellectual and political currents in the Global North and the Global South, Guardiola makes a rigorous argument for releasing knowledge from the grip of objectivity, politics from critique, and science from both self-referentiality and its alleged privilege to represent non-humans. Being Against the World thus means being against a particular kind of dominant modernist world; more importantly, it takes a decided stance for "world and knowledges otherwise," precisely those that are predicated on multiple ways of being/doing/knowing. It is in this world of multiplicities and an open-ended reality, as chronicled in the pages of this lucid book, that rebels of all kinds will find themselves at home.’

‘Acting as a reverse and manic Moses, Oscar uncovers ‘obscure and sublime objects such as ancient stones and rebellious angels, lost jungles and discarded humans, weird noises and uncanny fetishes’ everywhere. But unlike Moses and the 1900’s Dutch missionary D K Wielenga, he does not smash or demystify. He returns them, according to a law of eternal return and the rhythms of fetishistic jouissance, to the places and desires they came from: Latin America and totems, Africa and pirates, cities of the red night and cocaine nights, freed slaves and fields of energy. These are the places, the tools, the images and music of the rebel, the revolutionary who left behind the bipolarities of critique (judgment and change) and the strictures of the name of the father (with all the side effects of the beyond, well-known from psychoanalysis, the only orthodoxy left in an age that has turned the heretical into a lifestyle choice).’

Costas Douzinas, Director of the Birkbeck Institute for the Humanities, author of Human Rights and Empire and The End of Human Rights: Critical Legal Thought at the Fin-de-Siecle.

‘ In recent years political philosophers have increasingly concerned themselves with the lineaments of a political ontology, especially a "leftist" ontology.  Oscar Guardiola-Rivera goes further in this book’s attempt to explore the essence of the political in terms of "rebellion."  Fusing an idealized image of a pre-Columbian New World past with recent philosophical and logical speculations about archaic and quasi-objects, he proposes that we "[l]et rebellion…be the experience that remains problematic in mainstream accounts of objectivity, reality and causation" and enjoins us to "describe that experience as the return, enactment or postulation of contradictory objects [to] see what follows from their return." He thus fuses the form of logical and mathematical reasoning with an imaginative invitation to envisage the political not as order, but as a Jeffersonian imperative collectively to re-think the fundamental constitution of a people every generation.  For Oscar Guardiola-Rivera, the political is not for the faint-hearted.’

William Rasch, Professor of Germanic Studies at Indiana University, author of Sovereignty and Its Discontents and Niklas Luhmann’s Modernity.