Being Urban
Community, Conflict and Belonging in the Middle East 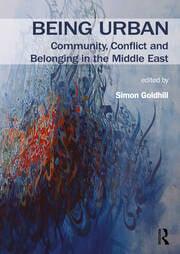 Being Urban: Community, Conflict and Belonging in the Middle East

In Being Urban, Simon Goldhill and his team of outstanding urbanists explore the meaning of the urban condition, with particular reference to the Middle East. As Goldhill explains in his introduction, ‘What is a good city?’, five questions motivate the book:

How can a city be systematically planned and yet maintain a possibility of flexibility, change, and the wellbeing of citizens?

How does the city represent itself to itself, and image its past, its present and its future?

What is it to dwell in, and experience, a city?

How does violence erupt in and to a city, and what strategies of reconciliation and reconstruction can be employed?

And finally, what is the relationship between the infrastructure of the city and the political process?

Following the introduction, the twelve chapters are grouped into four sections: Engagement and Space; Infrastructure and Space; Conflict and Structures; and Curating the City. Through each chapter, the contributors reflect on aspects of urban infrastructure and culture, citizenship, belonging and exclusion, politics and conflict, with examples from across the Middle East, from Cairo to Tehran, Tel Aviv to Istanbul.

Not only will Being Urban further understanding of the topography of citizenship in the Middle East and beyond, it will also contribute to answering one of today’s key questions: What Is A Good City?

is Professor of Greek at the University of Cambridge, Fellow of King’s College, and Foreign Secretary and Vice-President of the British Academy.