Between Freedom and Bondage
Race, Party, and Voting Rights in the Antebellum North 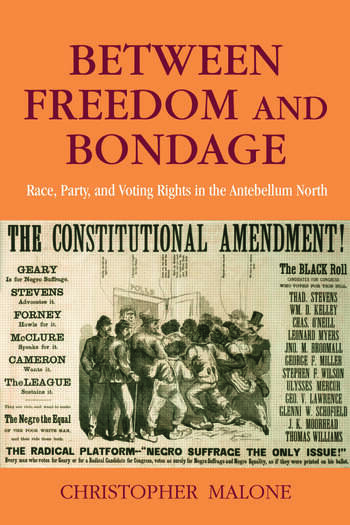 Between Freedom and Bondage: Race, Party, and Voting Rights in the Antebellum North

Between Freedom and Bondage looks at the fluctuations of black suffrage in the ante-bellum North, using the four states of New York, Pennsylvania, Massachusetts and Rhode Island as examples. In each of these states, a different outcome was obtained for blacks in their quest to share the vote. By analyzing the various outcomes of state struggles, Malone offers a framework for understanding and explaining how the issue of voting rights for blacks unfolded between the drafting of the Constitution, and the end of the Civil War.

Christopher Malone is an Assistant Professor in the Department of Political Science at Pace University.

‘Between Freedom and Bondage is an engaging and informative study. Malone is particularly adept at maintaining the coherence of his thesis through what are often complex narratives of state-level politics.’ – Journal of American Studies

'Christopher Malone has written a fine book that illuminates a little known part of the uneven history of black disenfranchisement and enfranchisement in the Northern states during the decades before the Civil War. Malone shows that the basic democratic issue of who shall vote was intimately entwined with the role of race in the economy, in partisan competition, and ultimately in political culture.' – Frances Fox Piven, author of Challenging Authority: How Ordinary People Change America

'A thoughtful examination of the politics of race in the antebellum North.'– Alexander Keyssar, author of The Right to Vote: The Contested History of Democracy in the United States

'The party names—Federalist, Whig, Democratic-Republican, Republican— have evolved and even rotated over 300 years, but Malone still draws a straight sociopolitical line between the North's original blue-blood, slave-holding revolutionaries of 1776, and today’s race politics of paternalism, on both sides of the ideological fence.' – Leon Wynter, author of American Skin: Pop Culture, Big Business, and the End of White America

'Malone has offered compelling insight into a neglected chapter in the history of the black franchise before the Fifteenth Amendment. Scholars interested in the differences in the antebellum years between the well-known racial liberalism of Massachusetts and the racial proscription of the rest of the North cannot afford to ignore this original book.' –Bruce Laurie, University of Massachusetts-Amherst, Journal of Social History